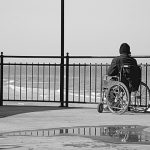 ISLAMABAD: Disability is in the environment, not the person. “These customised wheelchairs that we have received today will bridge the gap between the differently-abled and the constricted environment.” These words reflect the morale of 22-year old Sumaya Ilyas, who lost her legs to polio at age two. She was talking to The Express Tribune at a media briefing on the distribution of customised wheelchairs in Pakistan by Walkabout Foundation at Marriott Hotel on Sunday.

The wheelchairs Illyas was referring to were provided by Walkabout Foundation in collaboration with the Mahvash and Jahangir Siddiqui Foundation, JS Bank and the Special Talent Exchange Programme. Ilyas added that her polio infection was the result of the lack of awareness on the matter by her parents and society at large, but she is happy to see that awareness campaigns and help from NGOs are on the rise.

A testament to the insular nature of disability is that this generous distribution emerged from a place of tragedy for siblings Luis and Carolina Gonzalez-Bunster. Luis, who was left paralysed by a spinal cord injury suffered in a 1994 car accident, established the Walkabout Foundation with his sister in August 2009.

Together, the siblings took action in their community and started the Walkabout Foundation to promote awareness of paralysis and disabilities. Carolina explained the features of the customised ‘RoughRider’ wheelchairs valued at $300, saying, “They are easily adjustable, foldable and reparable with bicycle tubing and an adjustable footrest.” The wheelchairs also have five-wheel axles that make travelling on uneven surfaces easier.

Aamir Mehmood, a recipient, commented, “I just received this wheelchair and used it on a carpeted floor. It handles much better than the medical wheelchairs I used before. They were bulky, constrictive and tasking to manoeuvre in leaving one to other people’s mercy.” Another aspect of disability and the wheelchairs role in facilitation was mentioned by Mehmood.

“Every disability is different, and mine is due to muscular dystrophy that I was diagnosed with at age 18 and has no cure.” He elaborated that the disease is slowly incapacitating his limbs and he has limited function above his waist.

His friend, Atif Khan also a recipient, is in a somewhat similar situation. He too is wheelchair-bound, but in his case, the polio vaccine did not work on him and he fell prey to the disease at age one. However, unlike his friend, Khan still has function apart from his legs and proudly shared that he can drive a car and looks forward to exploring new terrain with the wheelchair, “which was an impossible dream with medical wheelchairs”.

Medical conditions aside, disabilities have become an extremely pressing issue for those in disaster affected areas in Pakistan, for both those who were disabled before and after the floods and earthquakes. Carolina shares, “there are 100 million people in the world who need a wheelchair and 12 million who can’t afford them, so the idea is to provide wheelchairs to those in need and help them live dignified, independent lives.”

As the event came to a close, many recipients happily exited the hotel, helping each other navigate the new wheelchairs and displaying that this is definitely a collective community.

By Mavra Bari
Published in The Express Tribune, February 27th, 2012.