No cure for spine injuries – but hope 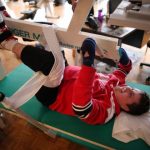 With research offering promise, the focus of treatment has changed.

Brendan Loney can’t move his legs, but once a week, he sure does run.

Suspended by a harness from the ceiling at Courage Center in Golden Valley, the 23-year stares ahead at a mirror while two therapists move his stocky legs across a treadmill. A third therapist straddles the treadmill and keeps Loney balanced. A fourth controls the machine and rotates in when the others get tired.

For Loney, who was paralyzed from the neck down in a 2009 diving accident, the exhausting “locomotor” therapy serves several purposes. It helps his body fight infections. It keeps his muscles strong.

And maybe, just maybe, it will keep his body ready for a breakthrough spine medicine that can give him back lost mobility.

“I’m trying to stay as fit as I can,” the former hockey player said, “and hopefully be a good contestant when they do come up with something.”

Hope like that was once drummed out of spine injury patients — especially for those with the most severe injuries — in part because doctors saw the despair that set in when patients clung to the notion of a recovery that never came.

But at some point between the paralyzing injuries to actor Christopher Reeve in 1995 and teen hockey player Jack Jablonski in December, that philosophy changed.

New treatments are starting to defy old notions about rehabilitation. Stem-cell transplants and other therapies are showing promise in research. But exercise has become the key. Patients who used to be left dormant are now being told to get in shape for the day if — some even say when — a meaningful treatment comes along.

It’s a delicate balance between today’s realities and motivation for tomorrow, said Dr. Gary Goldish, director of the Spinal Cord Injury and Disorder Center at the Minneapolis Veterans Medical Center. “How do we balance the patient’s hope for the future cure with the need for them to learn maximum function [today]?”

The spinal cord is the messenger from the brain telling the body what to do. It threads through the cervical, thoracic and lumbar portions of the spine, connecting at key junctures to nerves that control specific muscles. At the third vertebrae in the cervical column, or C3, the cord connects to nerves controlling the diaphragm. Complete injuries at or above C3 generally leave patients unable to breath or move any extremities on their own.

An injury at C5 would leave patients without control of their legs or hands, but limited arm and shoulder movements. (Jablonski was initially diagnosed with a C5 injury after he crashed head-first into the boards. He has since regained some motion in his arms. His family reported last week he was able to grasp a tortilla chip and feed himself.)

Recovery has generally been more likely when spinal cord injuries are “incomplete,” which means some portion of the cord is intact and sending messages from the brain past the injury site.

Susan Fink was told she would never walk again after a cross-country skiing accident 12 years ago, when she had to be sledded out of the Wisconsin wilderness by a sheriff’s deputy with a snowmobile.

Today, the 61-year-old walks with a walker around her home in St. Louis Park, but uses a power wheelchair everywhere else. Three times a week, she rides an exercise bicycle at Sister Kenny, using electrical stimulation to coax her leg muscles to move and pedal.

Doctors say her fitness would make her a good candidate for a next generation treatment, but Fink just wants to exercise to prevent back pain and retain her current mobility.

There was a time, Goldish said, when exercise therapy was reserved for patients who could pull themselves up on parallel bars and was viewed as a waste of time for those who couldn’t. Lately, however, research has found that 10 to 20 percent of patients with complete injuries can experience spontaneous recovery to the point that they are rediagnosed as having only incomplete injuries.

Doctors now believe that exercise can coax dormant muscles to send nerve signals toward the brain and to signal to the spinal cord that it needs to repair itself, Sandin explained.

That idea gained broader acceptance because of Reeve, who used his Hollywood celebrity to challenge doctors to focus more on recovery. He was among the first to use locomotor therapy following his injury in 1995.

Typically, two-thirds of a patient’s recovery will take place in the first two months. Reeve defied those odds through diligent therapy and his pursuit of experimental treatments in the U.S. and Israel. He remained on a ventilator until his death in 2004. But five years after his injury, he gained motion in his left hand that astounded doctors.

“Reeve was the exception to the rule, and he started a whole movement,” Goldish said.

Locomotor therapy has since spread and was added at Courage Center in 2011 with funding from the Christopher & Dana Reeve Foundation. Sister Kenny and the Minneapolis Veterans Center offer the ReWalk system, which uses robotic leg braces to help patients walk on treadmills.

Loney said he is a willing guinea pig. He was among the first to use the locomotor at the Courage Center and the first to use a new device by which he moved his legs in a bicycle motion by turning a crank with his arms. The first time, he couldn’t turn the crank at all. This week, he completed 200 revolutions.

Use it or lose it

Despite the progress, spinal cord experts disagree on the approaches that are the most promising. Studies, for example, have conflicted on whether steroids help spinal cord repair. Electrical stimulation is widely used to stimulate muscle motion during exercise, but some doctors worry that too much stimulation can inhibit healing.

Perhaps the biggest debate is what to do with the scar tissue that forms at the spinal cord injury. Some doctors argue that it must be removed surgically or chemically, while others believe it can be bypassed.

The Spinal Cord Society, a national group based in Fergus Falls, Minn., has been funding research using medication to clean out the scar tissue, then a stem-cell transplant to repair spinal cord damage, and then electrical stimulation to get paralyzed limbs moving. The treatment has proven successful in mice, said Dr. Eric Holmberg, a chemistry professor at the University of Alaska-Anchorage, who is in charge of the research.

“The brain and the spinal cord and the muscles have this sort of use-it-or-lose-it mentality,” Holmberg said. “If you don’t move your hand for five years, and then you try to move your hand, your brain is not going to know how to do it.”

Holmberg, Goldish and Sandin all warned of experimental treatments offered abroad. Goldish said there are foreign doctors who will surgically remove scar tissue and then perform stem-cell transplants. He has seen some patients at the Veterans Med Center who lost mobility after that surgery. “Are you willing to risk giving up that function?” Goldish said.

Loney prays daily for a cure, but isn’t waiting for one. Like Fink, he already has exceeded a doctor’s early prognosis — in his case that he would need a ventilator to breath for the rest of his life. He is completing a business degree at Gustavus Adolphus College and starting a clothing business, Live Life, that will sell inspirational apparel.

But if a cure comes along, Loney plans to be ready.

Two decades later, Hansen is still a man in motion

Helping Hands teaches Needham students about safety, with the help of...