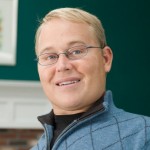 BOSTON — It’s been more than 16 years since Travis Roy, then a 20-year-old freshman, stepped onto the ice for his first-ever Boston University hockey game and was carried off a quadriplegic. A cracked vertebra left him paralyzed from the neck down.

Shortly after his accident, Roy regained limited use of his right arm — enough to move the joystick on his motorized wheelchair — but not his fingers. He has recovered no more movement since then.

Roy now lives in Boston, not far from the arena where he lost his mobility. He has written a book, “Eleven Seconds,” and he runs a foundation that gives grants for spinal cord injury research and equipment.

And on Wednesday, he spoke at BU’s Sargent College of Health & Rehabilitation Sciences about the mental challenges of his injury. Beforehand, Roy previewed his talk with WBUR’s All Things Considered host Sacha Pfeiffer, and he described his return to school less than a year after his accident.

Travis Roy: It was a hard time. When I look back at everything that I’ve done — and I’ve had some nice accomplishments and some bumps in road — I don’t know what I was thinking when I decided I was going to come back to BU 10 months after my injury.

You know, from just going into the dorm, 24-hour care attendants, and just trying to figure out who I was, my life, how I related to my fellow students, how I was going to academically do it. And then the transition to my sophomore year there were things that I didn’t do very well that I needed to do better in trying to acclimate myself.

The first time I went down to the cafeteria my freshman year in the wheelchair and going through the food line, and I’m thinking, “Oh my gosh, how am I going to fit in here and how’s this going to go?” And later, as I was finishing up, I realized that, as crowded as the cafeteria was, nobody came down and sat next to my table. All of a sudden I realized I am pretty darn different here. And I didn’t have a lot of confidence. I kept my head down.

And when I came back my sophomore year I promised myself that I’ve got to take some responsibility for this, and I’ve got to get my head up and look people in the eye and put a smile on my face and say hello, and it’s amazing what that simple gesture does.

Growing up, my parents, there was only one lesson that they shared with me as far as dealing with people with disabilities, and it was: don’t stare. And that’s true — you don’t want to stare. But the problem with that is that it makes you not acknowledge somebody. That looking them in the eye, it’s such a simple gesture to put a smile on your face and say hello because all of a sudden it makes me realize that that person has truly acknowledged me. And not only have they acknowledged me, but it shows a little bit of a comfort level that just opens that door for maybe another sentence or two or a little bit of dialogue.

You wrote that you try so hard to make sure that you are put together, that you are upright — things that seem so simple. But, as you said, it’s easy to be slouching and disheveled in a wheelchair.

And you felt that it was important to look put-together if you wanted to be treated with respect?

It’s so important. And maybe not so much respect, but the more “normal” you can look, the more people will treat you as normal.

You know, I don’t wear sweatpants unless I know I’m going to be home on a Sunday and not going out. And it’s a challenge to find clothes that fit. I mean, I don’t have abdominal muscles — there isn’t that nice tight stomach, you know? So I wear an abdominal binder and a little side support under my armpit that keeps me from falling over to the left and keeps me looking straight in the wheelchair. It’s a big part of people looking at you as an equal.

I have my care attendants. I call it the changing of the guards.

Every eight hours or so?

Exactly. I have a care attendant come at 7 in the morning to relieve the person that was there with me overnight, and she’ll bathe me and dress me and [make] a little bit of breakfast.

Now, I made that sound really simple, but that’s about a two-hour process. And then I’m usually at my computer by 9-9:30 answering emails. A lot of work with the Travis Roy Foundation. That’s been a lot of fun. That takes up a lot of my time. I probably put in anywhere from 30 to 40, 50 hours [a week] answering emails with that, and fundraisers. And then I make my living, though, working as a motivational speaker.

You wrote in your book, near the very end, “Soon, I see myself on my own two feet again, in 10 years.” Well, it’s clearly been more than 10 years.

Do you still believe a cure is coming in your lifetime?

I think that there will be a major cure in my lifetime. My bigger concern is I don’t know that I’ll be in a position anymore to benefit from that. The muscles and the bones and the osteoporosis and atrophying in the muscles. It’s been 16 years. It very well could be another 16 years. Thirty years in a wheelchair is a long time.

But, boy, if I could get a little bit more dexterity in my fingers and my arms, and to be able to get in and out of bed on my own, and if there was ever a day when I didn’t need the 24-hour care attendants, that would signify a “cure” for me.

You had mentioned that after your injury you spent six months in the hospital and then, I believe, six months in outpatient rehab — but you’ve had essentially no rehab since then?

That’s true, and I’m not real proud of that. At the same time, it’s a different culture now. When I came out of the hospital there weren’t any real therapies that doctors and therapists were encouraging me to continue to do. Now they have much longer, higher-intensity therapy. Some of that I’m sure I could probably benefit from to a certain degree. But to put in the time to getting the benefits of doing the physical therapy, I think it would cut in a little bit to the things I enjoy doing. And that’s a decision that I’ve had to make.

Having been a top athlete, do you have a way now to satisfy your competitive spirit, or do you feel like that goes away when you lose the ability to be physical?

No, there’s — I can’t deny I am still heartbroken with not only the loss of playing hockey and a game that I just loved. And not only did I enjoy the games, but my dad happened to manage an ice arena, and the nights that I spent in that rink all by myself were sort of my greatest moments. And the pleasure that I took out of challenging myself out on the ice. And along with that I miss being able to compete. I miss those emotions. I miss the idea of scoring a game-winning goal and that elation that you just cannot get anywhere else, and the pride that you have in your team. You just can’t replace that.

In the work you do now with your foundation and speaking, do you work directly with people who have spinal cord injuries?

People might be a little surprised to hear this: Not so much. And that’s intentional. People apply for the grants. I read their stories. I read their applications. It’s emotional. It’s hard. You know, it’s a father of three who jumped on the trampoline and now the side effects of that. But I can’t escape being a quadriplegic – trying to remember when I took my pills last, when was the last time I did a weight shift that prevents pressure sores, have I ordered my medical supplies, what care attendant is going to work on Thursday because I need to drive here or there. My mind is consumed with dealing with this injury. So what I’m saying is I don’t really want to surround myself anymore with other people with paralysis.

With that said, there are certainly times when I get together and I see people and I will say I learn more from my fellow quadriplegics or people who are paralyzed and I get so much out of that.

Right after your accident you were in the news everywhere. Al Gore came to your hospital. Bobby Orr helped do a fundraiser. Do you still feel remembered now?

I do. It’s very different. When I would roll down the street, there were a lot more whispers and, “There’s Travis Roy.” And there were perks that came along with that. I’d go out to eat and I didn’t pay for a lot of meals, you know? It was great. I pay for a lot more meals now! But part of me — it’s kind of nice just to blend in.

By Sacha Pfeiffer and Lynn Jolicoeur