The Can-Do American Spirit: The Incredible Journey of Mark Stephan 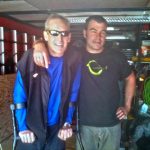 In the tough times this country is currently navigating, there are plenty of tales of woe and despair to go around.

However, there are certain inspirational people who somehow manage to rise above the obstacles thrown at them with grace, toughness, and unbelievable courage, turning almost unimaginable adversity into incredible inspiration. Call it the triumph of the American spirit.

My old friend Mark Stephan is the personification of such triumph. Five years ago, a morning bike ride turned into a disaster when the front wheel of Mark’s bike fell off, hurtling him head first into the pavement, instantly leaving him a quadriplegic after suffering the same type of neck injury as the late actor Christopher Reeve. The initial prognosis was grim.

Fast forward five years to today: Stephan, still a quadriplegic, is riding a bicycle across the country from San Diego, CA, to St. Augustine, FL, in order to raise money for the Rehabilitation Institute of Chicago ($600,000 so far) and to raise awareness about spinal cord injuries, but mostly — to give hope to others who have suffered similar injuries.

In Stephan’s world, with enormous odds to overcome and barriers to be broken, there simply isn’t time to worry about what can’t be done.

Besides, after he climbed the stairs to the top of Chicago’s Willis Tower a couple of years ago, what the hell else would you expect him to do?

Well, for one, there’s a continent to be traversed.

As he writes on the Web site chronicling his journey, Stephan Challenge, “If you live through an accident like mine, you have two choices. One is to accept the injury and living the rest of your life with it. The second choice is to keep battling — and never stop trying to get better.”

Mark Stephan’s journey since his accident has been nothing short of incredible.

While rehabbing at the Rehabilitation Institute of Chicago after the accident, he told friends he would walk out when he left. And true to his word, when he was discharged, he pushed and pulled and struggled against his body, leaving his wheelchair by the lobby elevators and slowly, painfully, walked with assistance to the building’s exit in front of an astonished and emotional group of friends and family.

He then embarked on a grueling rehab schedule as an out-patient — eight hours a day, five days a week.

In the middle of that initial, year-long, out-patient rehab, I went to visit him on a trip back to Chicago. When I first saw him, it was after he had fallen while getting ready for my visit, and I needed to help get him up. He looked up at me from the floor as if to say, “Can you believe this?”

Not being able use his arms or his legs, he told me that his body was just ‘like a sack of potatoes.’ It took two of us to lift him off the floor. We tied a belt around his waist and helped him down the stairs to the kitchen, me in front, a trainer in back, holding the belt as Mark struggled grittily down the steps to the kitchen.

Afterward, we talked, we laughed, we ate. As I was leaving his home, Mark told me he wanted to walk with me to the coffee shop three or four blocks from his house before I went back to Texas.

So we did. It took us about 40-45 minutes as he pushed and pulled and willed his body the whole way with the aid of a walker. Then, accompanied by another old college friend, we walked back, another 40-45 minutes. I left, amazed by my friend.

About a year and a half later, I came back to Chicago for another visit. I again went to see Mark. We again walked to the coffee shop — this time he was using crutches, not a walker. It took us about 30 minutes to get there.

We talked about a lot of things, and I listened with awe as he told me about his climb of the 100-story Willis Tower. Then it was another 30 minutes back.

“Still not fast enough,” he said. “Next time you come, we’ll do better.”

Now, two years later, he rides a recumbent bicycle across the United States of America.

Crossing Texas was tough, he told me while in Austin after spending a night in a local hospital being treated for dehydration brought on by an intestinal infection.

Of course, he was back on the bike two days later after the hospital stay, churning out the miles on his way to Florida and the Atlantic Ocean.

Then there was that accident a few days later, when a car hit one of the trip’s support vehicles and they all skidded into Mark’s bike, damaging it enough to require repairs. After making sure some of the minor injuries received the necessary medical attention (one broken wrist), a few hours later that same day he got back on his repaired bike and rode on.

Sickness, accidents, whatever: He had to get the miles in. After all, he’s only raised $600,000 of the $1 million he hoped for. But far more important, there’s a continent to cross, and people of all kinds to inspire.