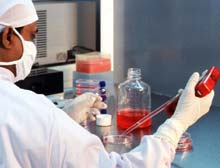 HOUSTON, Texas (AP) — Scientists gather routinely at the Texas Medical Center to share research. But they are meeting this weekend in enemy territory for a war-room session on political strategy.

Advocates of embryonic stem cell research from the fields of academia, politics, health care and medicine — including South Korean cloning pioneer Hwang Woo-suk — are plotting ways to quell opposition and get the research money flowing.

“The choice of Texas for the meeting is symbolic,” said Bernard Siegel, executive director of the Genetics Policy Institute, the host of the meeting at Baylor Medical Center. “Lost in the focus on the federal legislation are the brutal state-by-state battles being waged for this research.”

President Bush’s home state is one of several debating limits on stem cell research. As the legislative session ended last month with no action on the issue, Republican Gov. Rick Perry said it was “fine with me” if another state took the lead role in such research.

“This is a war on behalf of science,” said Neal Lane, a senior research fellow at the James A. Baker III Institute for Public Policy at Rice University, a co-sponsor of the meeting.

Research into embryonic stem cells — which can morph into all kinds of human tissue, providing possible treatments for Parkinson’s disease, diabetes and spinal cord injuries — has ignited a new right-to-life battle.

Opponents, including the president, argue that retrieving stem cells from human embryos, which are destroyed in the process, is tantamount to murder. Bush has threatened to veto a bill in Congress that would lift restrictions on federal money for embryonic stem cell research.

And although the administration does not bar private or state funding of such projects, U.S. researchers say a lack of federal support is severely hampering their efforts.

Houston’s medical center is an oasis of support for the proponents gathering this weekend. They say the embryos largely come from fertility clinics, where the unused ones would be destroyed anyway, and that the potential benefits to people suffering from disease and injury are vast.

But Texas’ conservative politics sit just outside the renowned medical center. During the last legislative session, lawmakers considered bills that would ban human cloning and the use of state money to destroy human embryos.

None of the bills made it out of committee.

Siegel said legislation like some of the measures considered in Texas “sends a message to the biotech community: ‘We’re not in favor of scientific research.”‘

About 150 people are expected at the stem cell policy summit, where Siegel said he hopes to come away with lobbying and campaign tactics for pushing favorable legislation through the states and Congress.

Of the dozen sessions over two days, only two focus on pure science. The rest have titles such as, “The Stem Cell Agenda for the Second Bush Term” or “Building the Stem Cell Constituency: Effective Advocacy at the Grassroots Level.”

Dr. Beverly Nuckols, a board member of Texas Alliance for Life, said she plans to listen but remains unconvinced.

“I’m all for stem cell research,” she said. “I’m just not going to kill anybody for it.”

Nuckols said her group and others like it support the use of adult stem cells. Researchers, however, say those cells are less versatile and are sometimes damaged by the health problems of the adult.

“If you believe that a human egg is now suddenly a human life, it’s very difficult to have a discussion,” he said. “Scientists need to engage the public and explain the potential.”

Lane and Paul Mandabach, the lead political consultant on California’s successful Proposition 71, in which voters approved $3 billion for stem cell research, said educating opponents is the only way to win.

“As the realities of these cures become clear, the morality arguments will be lessened,” Mandabach said.

Quadriplegic Perry Cross on why he travels to India as a...