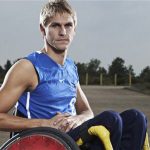 When Steve Brown broke his neck it was wheelchair rugby that spurred him on to recovery. Now he’s captain of the sport’s GB Paralympic team

In April 2005, my life was turned upside down. While working as a tree surgeon, I fell from a tree and broke my spine. The effects of this injury were instant and permanent. My spinal cord was severely damaged just below the 12th vertebra, leaving me paralysed from the waist down. I was 36 years old.

It felt like my life had come to an end. I struggled to picture a future without the use of my legs. My wife Penny was pregnant and I was facing the prospect of new parenthood when I could barely look after myself.

Over the next three months, I underwent rehabilitation at the National Spinal Injuries Centre (NSIC) at Stoke Mandeville Hospital. The support and expertise I found there laid the foundations for me to rebuild my life. I had to learn new ways to do so many things that one takes for granted: rolling over, sitting up, getting from a bed into a (wheel)chair, even emptying my bladder using a catheter.

As I became stronger and more competent at doing things for myself, I watched a steady trickle of new arrivals to the hospital. Some of the new faces looked lost, but not all. Three weeks before I was discharged, I was joined in the rehab gym by Steve Brown, a tall, blond 23-year-old with a broken neck and an infectious smile. He threw himself into rehab. Throwing and catching to develop balance, lifting weights or sitting up, Steve measured every activity against previous performance, always pushing himself to improve. With his devoted parents and three younger brothers, he brought a wonderful positivity into the gym.

Much has since changed for both of us. I was discharged a week before my daughter Rosalie was born. Focusing on the challenges of parenthood helped my wife and me adapt to my life in a wheelchair. I wrote a book about the experience, Looking Up, and this led me into journalism, a career I would never have contemplated before.

For Steve, his new life would have come as even more of a surprise: he is now captain of the Great Britain wheelchair rugby team. It is a life that he is fully committed to. He needs to be: as the Paralympic Games approaches, the training regime is tough. As well as playing rugby four times a week, Steve goes swimming twice-weekly and puts in six sessions at the gym. This is a full-time job, only made possible through funding from UK Sport, the National Lottery, a Sky Sports scholarship and support from numerous local charities.

Dubbed ”murderball’’ when it was founded in Canada in 1977, wheelchair rugby is a high-speed, full-contact sport where two teams of four attempt to carry the ball over their opponents’ goal-line. Smashing into your opponent’s chair as hard as possible is part of the fun, and the full-blooded collisions, often leading to overturned wheelchairs, are its most striking – and sometimes unsettling – feature.

I have come to watch Steve train at the Aspire National Training Centre in Stanmore, Middlesex. He is fit, fast and very focused. Now living independently in Swale, Kent, his life is dominated by rugby. His love for sport began early: “I was always one of those kids who would use a school bag for a goalpost or a wicket, and make do,” he says.

It was while working as an area manager for a holiday company in Cologne that Steve suffered the accident that changed his life. “I tripped and fell from a first-floor balcony. As I fell, I caught the rail, which spun me round so I landed on my bum, but I was looking up when I landed, so when my body stopped my head went back over my shoulders, like a severe whiplash. It snapped my neck, dislocating the C7 [one of the cervical vertebra, below the skull] and trapping my spinal cord.”

The damage done was worse than mine. Steve has no movement at all from his chest downwards, his hands are impaired and sensation stops at his wrists. While I have full use of the muscles in my arms, hands and torso, Steve has had to adapt to life unable to use his triceps and with poor grip in his hands. And without functioning abdominal muscles, he is unable to sit up without being supported by his wheelchair.

After surgery in Germany to stabilise his neck, Steve was transferred to Stoke Mandeville. The loss of physical activity was a massive shock. “I’d left home aged 18 to work abroad. I was doing well and looking towards promotion. All that went out of the window,” he recalls. “I ended up in hospital where everything’s flat and easy and safe, with everybody helping me. It wasn’t what I wanted.”

Many people with spinal cord injury describe having a ”Eureka’’ moment, when an ambition, however modest, comes into focus. For me, the moment came in a wheelchair skills session at Stoke Mandeville, delivered by a charity called Back Up. I saw then what experienced wheelchair users could do, including back-wheel balancing, negotiating steps and steep ramps. I went on to master all these techniques, which meant the great outdoors was within my reach: I could negotiate rough tracks, mud, gravel, and even the occasional beach. It wasn’t long before I felt able to travel the world with a degree of confidence.

Steve’s moment came when a Stoke Mandeville physiotherapist took him to watch the GB wheelchair rugby team. The memory of it still makes him emotional. “It was one of the first days that I’d been up in a wheelchair, barely a month after my accident. My dad pushed me down [to the sports centre next to the hospital]. I couldn’t think of anything more humiliating than being out in public. I had no balance, I was timid and embarrassed at people looking at me.”

But seeing the team in training was inspiring. “There were people trying to knock each other out of their wheelchairs, shouting, swearing and arguing. There was a canyon between where I was mentally and physically and where they were. A lot of them had similar injuries to me, some had worse, and I thought: ‘If they can be that confident, why can’t I?’ It was a turning point.”

Less than five months after breaking his neck, he was at his first wheelchair rugby training session in Stanmore. His rise within the sport was meteoric: he was selected for the British squad within a year, and narrowly missed out on the team for Beijing in 2008. Appointed captain in 2011, he was told earlier this year he would be leading the British team for London 2012.

Playing wheelchair rugby has made Steve stronger, which in turn has made day-to-day living easier. But in 2010, a collision with two players left him with broken ribs and a broken sternum, which put him back in hospital for six weeks.

“Every sport has its own level of risk. It’s just a question of assessing whether it’s one you’re willing to take. Wheelchair rugby is no different. Some people have said, ‘You play that even though you’ve broken your neck?’ But I had to break my neck otherwise I wouldn’t even qualify to play the sport.” (Wheelchair rugby players must have a loss of function in both the upper and lower limbs to qualify for the sport.)

Sometimes, people ask whether he would change things back if he could. He does not have an answer. “I’m comfortable and content with how my life is. I’ve got people in my life who love me, I’ve got things in my life that I love, and I’m fulfilling an opportunity that I wouldn’t have got without my injury. For now, I’m just concentrating on making sure that I’m the best I can be and that I can do myself, my family, my coach and my country proud.”

Come the Paralympics in September, Steve will take to the court for the biggest tournament of his life. The GB team is ranked sixth in the world, but he says they will have a good shot at a medal – and I shall be watching him. It all feels a long way from my first day in the rehab gym at Stoke Mandeville.