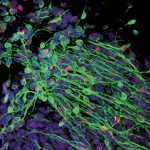 LA JOLLA, CA—For more than 20 years, doctors have been using cells from blood that remains in the placenta and umbilical cord after childbirth to treat a variety of illnesses, from cancer and immune disorders to blood and metabolic diseases.

Now, scientists at the Salk Institute for Biological Studies have found a new way-using a single protein, known as a transcription factor-to convert cord blood (CB) cells into neuron-like cells that may prove valuable for the treatment of a wide range of neurological conditions, including stroke, traumatic brain injury and spinal cord injury.

The researchers demonstrated that these CB cells, which come from the mesoderm, the middle layer of embryonic germ cells, can be switched to ectodermal cells, outer layer cells from which brain, spinal and nerve cells arise. “This study shows for the first time the direct conversion of a pure population of human cord blood cells into cells of neuronal lineage by the forced expression of a single transcription factor,” says Juan Carlos Izpisua Belmonte, a professor in Salk’s Gene Expression Laboratory, who led the research team. The study, a collaboration with Fred H. Gage, a professor in Salk’s Laboratory of Genetics, and his team, was published on July 16 in the Proceedings of the National Academy of Sciences.

The Salk researchers used a retrovirus to introduce Sox2, a transcription factor that acts as a switch in neuronal development, into CB cells. After culturing them in the laboratory, they discovered colonies of cells expressing neuronal markers. Using a variety of tests, they determined that the new cells, called induced neuronal-like cells (iNC), could transmit electrical impulses, signaling that the cells were mature and functional neurons. Additionally, they transferred the Sox2-infused CB cells to a mouse brain and found that they integrated into the existing mouse neuronal network and were capable of transmitting electrical signals like mature functional neurons.

“We also show that the CB-derived neuronal cells can be expanded under certain conditions and still retain the ability to differentiate into more mature neurons both in the lab and in a mouse brain,” says Mo Li, a scientist in Belmonte’s lab and a co-first author on the paper with Alessandra Giorgetti, of the Center for Regenerative Medicine, in Barcelona, and Carol Marchetto of Gage’s lab. “Although the cells we developed were not for a specific lineage-for example, motor neurons or mid-brain neurons-we hope to generate clinically relevant neuronal subtypes in the future.”

Importantly, says Marchetto, “We could use these cells in the future for modeling neurological diseases such as autism, schizophrenia, Parkinson’s or Alzheimer’s disease.”

Cord blood cells, says Giorgetti, offer a number of advantages over other types of stem cells. First, they are not embryonic stem cells and thus they are not controversial. They are more plastic, or flexible, than adult stem cells from sources like bone marrow, which may make them easier to convert into specific cell lineages. The collection of CB cells is safe and painless and poses no risk to the donor, and they can be stored in blood banks for later use.

“If our protocol is developed into a clinical application, it could aid in future cell-replacement therapies,” says Li. “You could search all the cord blood banks in the country to look for a suitable match.”

Other researchers on the study were Diana Yu, Yangling Mu, Cedric Bardy and Guang-Hui Liu, from the Salk Institute; and Rafaella Fazzina, Antonio Adamo, Ida Paramonov, Julio Castaño Cardoso, Montserrat Barragan Monasterio and Riccardo Cassiani-Ingoni of the Center for Regenerative Medicine in Barcelona.

The work was supported by the California Institute for Regenerative Medicine, The Lookout Foundation, the G. Harold and Leila Y. Mathers Charitable Foundation, the Leona M. and Harry B. Helmsley Charitable Trust, the JPB Medical Foundation, MINECO, Fundacion Cellex and Sanofi.

About the Salk Institute for Biological Studies:
The Salk Institute for Biological Studies is one of the world’s preeminent basic research institutions, where internationally renowned faculty probe fundamental life science questions in a unique, collaborative, and creative environment. Focused both on discovery and on mentoring future generations of researchers, Salk scientists make groundbreaking contributions to our understanding of cancer, aging, Alzheimer’s, diabetes and infectious diseases by studying neuroscience, genetics, cell and plant biology, and related disciplines.

Faculty achievements have been recognized with numerous honors, including Nobel Prizes and memberships in the National Academy of Sciences. Founded in 1960 by polio vaccine pioneer Jonas Salk, M.D., the Institute is an independent nonprofit organization and architectural landmark.