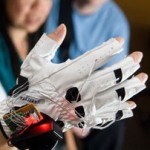 The wireless device is helping tetraplegic study participants learn songs on a keyboard while improving sensation in their hands.

A wireless musical glove developed at Georgia Tech not only teaches users to play songs on the piano, but may also improve the sensation and mobility of the hands of people who have suffered spinal cord injuries, researchers report.

The Mobile Music Touch (MMT) device, which works alongside a computer and a keyboard, improved rehabilitation even in patients who had sustained the injury more than a year earlier — a point at which improvements tend to be minimal at best.

“After our preliminary work in 2011, we suspected that the glove would have positive results for people with [spinal cord injuries],” project head Tanya Markow said in a school news release. “But we were surprised by how much improvement they made in our study. For example, after using the glove, some participants were able to feel the texture of their bed sheets and clothes for the first time since their injury.”

Once a song is programmed into a computer, smartphone, or MP3 player, the user learns to play it through both tactile cues from the glove (which vibrates the fingers that should tap) and visual cues from the keyboard (which lights up the notes that should be played). Over time, users can learn to memorize the songs and expand their repertoire.

In this study, some participants were instructed to practice with the glove for 30 minutes three times a week, and also to wear the glove for two hours five days a week simply to feel the vibrations. Other participants practiced the songs and went about their usual routines without the glove.

The researchers then tested participants using several grasping and sensation tests to measure progress, and report that those using the MMT device performed significantly better than those who didn’t.

Markow says the improvements could be the result of renewed activity in the hand’s sensory cortex, which leads to firing in the brain’s motor cortex, all triggered by the vibrations. It’s unclear whether wearing the glove outside piano practice further improved results.

Markow hopes to expand the study to include functional MRI results.