Number of shooting victims now in wheelchairs is hard to determine 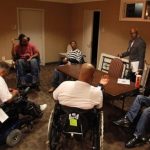 When gunfire sounds in a city, police respond, relatives are notified and journalists summarize the aftermath in a quick headline: “Three shot, one dead.” But unless it is a high-profile case — a school shooting or a midnight movie massacre — few will ever know the true toll.

“It’s so often that homicides get the headlines, but you have to realize 95 percent of the time a gun is fired, no one is killed,” said Kenny Barnes, who founded the nonprofit group Reaching Out to Others Together after his son was shot and killed in the District in 2001. “What we don’t really talk about is what happens when there is not a homicide.”

Police departments in Northern Virginia, Maryland and the District haven’t routinely tracked how many people are shot and survive. In response to Freedom of Information Act requests for the number of gun violence survivors spanning the past two decades, departments were able to provide only partial data.

In Prince George’s County, which began tracking nonfatal shootings in January 2011, the police department investigated the shooting deaths of 64 people. That year, the department also saw 180 nonfatal shootings. Police officials said that acquiring older data would require a manual search of each assault case, which would be time-consuming and expensive.

In Fairfax County, from 1995 to 2011, police responded to 115 homicides and received 321 reports of an assault in which a firearm was involved. Of those 321 reports, police could not say how many involved a person being shot.

The most illuminating numbers come from the District, which changed how it codes assaults with a deadly weapon two years ago, creating separate categories for cases in which someone fired a gun and in which a bullet struck a person.

Last year, 77 people in the District were shot and killed. That year, D.C. police responded to 232 assaults in which shots were fired. Of those cases, 184 involved at least one person being hit by a bullet.

In 2010, there were 99 fatal shootings. That year, police also saw 295 assaults in which shots were fired, and of those, 236 involved at least one person being hit. Still, it remains unknown how many of those victims were left with long-term disabilities.

The District’s most severely wounded gunshot survivors — those with head and spinal cord injuries — often end up at MedStar National Rehabilitation Hospital. From 2006 to 2011, the hospital kept detailed data on spinal cord injuries, which it sent to the National Spinal Cord Injury Statistical Center in Alabama.

In those years, the hospital saw a total of 240 spinal cord injury patients, 61 of whom were there because of bullet wounds. Of those gunshot victims, the overwhelming majority — anywhere from 85.7 percent to 100 percent in any given year — were African American.

Not shown in the data are those patients who went elsewhere for therapy, or who ended up paralyzed from gunshot wounds to the head (as opposed to spinal cord injuries), or who found their bodies permanently altered by a bullet before 2006 and, in particular, during the early 1990s, when gun violence was so pervasive that the city was considered the murder capital of the nation.

No one, experts say, was keeping track then.

Read more:
In D.C., another measure of gun violence: Men in wheelchairs

After a spinal-cord injury, life goes on