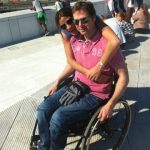 (CNN) — As the sun rose over France on August 13, 2011, Knut Olstad was looking forward to continuing his bicycle journey along the Tour de France route. But by the end of the day, the vacation had taken a terrible turn that would change his life.

The 46-year-old financial consultant from Norway doesn’t remember much about the accident that left him paralyzed from the chest down. He was shown pictures of himself lying on the ground with a broken back after being catapulted from his bike while trying to avoid a collision with a car.

After his initial recovery, Olstad searched the Internet for information that might get him out of the wheelchair he now uses to move around.

This is how he found a clinical trial conducted by StemCells Inc. at Balgrist University Hospital in Zurich, Switzerland. The company was looking for 12 recently paralyzed patients for a study of its product: purified human neural stems cells derived from donated fetal brain tissue.

While many patients with spinal cord injuries have put a lot of hope in stem cell research, the field has been very slow to move forward. StemCells Inc. was granted permission to conduct its study just a month after the world’s first approved clinical trial testing human embryonic stem cells in humans was shut down by the biotech company Geron due to excessive costs. Geron was testing embryonic stem cells in paraplegics, too.

StemCells Inc. received approval to start the clinical trial in Switzerland using non-embryonic stem cells, called adult stem cells, which are not quite as controversial.

To qualify for the trial, patients had to have suffered a complete thoracic spinal cord injury within the past four to 12 months. This means their spinal cord was severely injured at the chest level, so they still have movement of their arms and hands but can’t feel or move anything below the chest.

After a week of testing, Olstad got some good and bad news from Dr. Armin Curt, the main researcher for this study. The bad news, according to Curt, was that Olstad did indeed have a “complete” spinal cord injury. On the flip side, Olstad qualified for the study.

Four months after his accident, when researchers were confident that Olstad’s condition would no longer improve naturally, he was wheeled into an operating room where 20 million neural stem cells were injected.

The process takes only about five to 10 minutes, says Dr. Stephen Huhn, a neurosurgeon and the head of the CNS (central nervous system) Program at StemCells. The cells don’t go into the actual lesion or injury point on the spinal cord, he says, but into the tissue immediately surrounding the lesion.

After a month-long stay in the hospital following surgery, Olstad says, things started to happen. Although he couldn’t say where exactly he was being touched (like on his abdomen or his side), he says, “If somebody touched me, I could feel it. I couldn’t feel that before the operation.”

This week, Curt presented data on the how the first three patients in his study are doing at the meeting of the International Spinal Cord Society. Researchers, and later investors, learned that these stem cells were not only well-tolerated and safe, but that what Olstad feeling was was also occurring in another patient.

All three patients were tested for motor and sensory function at three and six months after their injections to see whether the stem cells were helping.

Researchers evaluated whether each patient could feel being touched lightly, getting a pin prick and having heat applied to their skin. To verify that they weren’t recording a placebo effect and could actually feel pain, researchers sent electrical impulses across the spinal cord to see whether the stimulation was registering in the brain.

Patient No. 1 saw no changes. But when researchers tested patients No. 2 and No. 3 (Olstad), they were able to see that something was indeed happening.

“We actually saw changes which we rather did not expect to see,” Curt said. “These findings support the changes we see are not related to placebo effect.”

StemCells Inc. recognizes the importance of not over-hyping its results, because it doesn’t want to give other patients false hope.

Both Curt and Huhn were clear about the fact that results from three patients are very preliminary, and a lot more research needs to be done to replicate these results and fully explain what might be happening. They plan to follow these and future patients for a long time.

Dr. Keith Tansey, director of spinal cord injury research at the Shepherd Center in Atlanta, was not involved with this study but attended the meeting where Curt presented this early data. Tansey says these are promising results and a good sign for the study going forward. But he adds a note of caution: It’s important to manage expectations, because only two out of three patients showed positive results.

“If you think this is a home run or a grand slam, we’re not there yet,” Tansey said.

Nobody is walking again. But even if the stem cells lead to patients regaining only some feeling, Tansey says, it can help them avoid getting bed sores or getting burned (for example, he’s seen patients burned by having laptops on their bodies for too long without feeling it).

In addition to further monitoring of the first three patients, Curt and StemCells Inc. will move ahead with the next phase of their trial: injecting the next four patients. These patients will have some limited function below the level of their spinal cords, or what’s known as an incomplete injury.

Patients in the United States and Europe are eligible to participate in the next phase of this clinical trial.

In the meantime, Olstad is looking forward to returning to Zurich for his nine-month checkup in just a couple of weeks. He hopes to get confirmation of even more improvements: “Sometimes, I can feel my girlfriend is squeezing my legs.”

He hopes this new set of tests will confirm what he believes he is feeling.

“I don’t want to give false hope,” he said, “(but) I believe it is really the cells that have made the difference.”