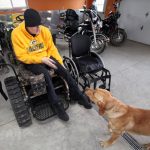 FREDERICK — Though Cole Truebenbach is paralyzed from the chest down, he quickly lifts himself out of his wheelchair.

With little effort, Truebenbach hefts his body into the contraption next to him. The device — equipped with treads instead of tires, camouflage instead of leather — is an all-terrain vehicle embodied in a wheelchair.

A few moments later, the 20-year-old is standing tall at his true height, 6-foot-2.

“Standing up was really nice. Just to get up and look someone in the eyes again,” he said.

The device, called an Action Trackstander, is an electric, off-road wheelchair with tracks to go over rough terrain and even small streams. Truebenbach is able to get out of his normal chair and into the device in less than a minute. But more importantly, it lets him stand tall like he did before his accident. The device can lift him up from sitting to standing in moments and allows him to move while standing — perfect for holding a rifle or crossbow.

On June 30, Truebenbach, a 20-year-old Frederick native, was riding his dirt bike with friends near Rapid City when he rode over a hill without realizing there was a 15-foot drop on the other side. After riding off the edge, he landed hard, hitting his chest on the handle bars. He broke two vertebrae, his sternum and two ribs. He also injured three other vertebrae.

After undergoing surgery in Rapid City and physical therapy at Craig Hospital in Denver — a medical facility specializing in spinal cord injury — Truebenbach is recovering at his family’s home in Frederick.

Despite the injury and loss of movement, Truebenbach has chased around coyotes with friends, drove a grain cart during the harvest season, and plans to hunt pheasant and deer in the coming months with his electric wheelchair.

“I knew I’d be out there (hunting), but I knew it wasn’t going to be the same,” he said. “This’ll actually be able to get me out in the woods and help me with a little bit more archery hunting. That’s what I like the most. That’s the one thing I never thought I’d be able to do again.”

When he could stand, he was a constant adventurer. One day he could be in Frederick, the next day in Fargo, N.D., and then out alone on hunting trip.

“I was in the best shape of my life when I got hurt,” he said, adding he lifted weights and ran 10 miles each week. Though his shoulders are still well-muscled from the time before the accident, the rest of his body has changed. He lost 30 pounds the first week in the hospital.

He slowed down, and lost much of his independence.

“That’s the toughest part for me — relying on people and not being able to do stuff.”

The Action Trackstander — which sells for near $10,000 on the Web — was bought by friends of the family who raised money to buy the electric wheelchair for him.

Though he reluctantly accepts the help, he is nothing but thankful for it.

Though the accident crippled him, Truebenbach is trying not to let it interfere with his life.

A neighbor who was harvesting in September rigged a grain cart with hand levers so Truebenbach could drive it. He plans to return to Lake Area Technical Institute in Watertown, where he was an agronomy student, to complete his degree next fall.

The second day Truebenbach came back home from his two-month rehabilitation, his best friend picked him up to go driving.

“We saw a coyote and sure enough we were blazing through the field, going after it,” Truebenbach said. “Then I look back in the rearview mirror and the (old) wheelchair flies back out. It pretty much destroyed it.”

“It’s like some things don’t change, you know,” his father, Mitch Truebenbach, said.

But Cole Truebenbach is hoping for one change: To be able to walk again.

Though he said doctors told him he has only a 3 percent chance of walking again, it’s enough of a shot for him.

“I don’t have the greatest chance of getting it back, but I do have a chance,” he said.

He is looking into Project Walk, a recovery program in California for people with spinal cord injuries, and doing research online.

“I could tell you more about spinal cord injuries than you’d want to know,” he said.

Though Truebenbach struggles with staying positive, his family and friends don’t.

“I told him there were 10,000 things you could do before your accident; now there’s 9,000,” Mitch Truebenbach said. “Do you want to concentrate on the thousand you can’t do or do you want to get to the 9,000 that you’ll never get done anyway?”

His mother, Carolyn Truebenbach, reminds him that he can’t live in the past.

And the message has gotten through.

But if he had it his way, he would want to be: “The kid that wasn’t ever supposed to walk again that got up and walked again and proven doctors wrong,” he said with a grin. “I’d love to be that guy.”