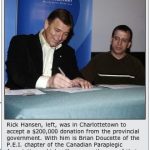 Premier gives $200,000 over five years to help those with spinal cord injuries

Twenty years after his historic Man in Motion Tour last brought him to P.E.I., Rick Hansen returned to the province Thursday to enter into a new partnership agreement with the provincial government.

Hansen and representatives of the Canadian Paraplegic Association joined Premier Pat Binns at Province House to affix their signatures to the certificates of participation in the new initiative.

As part of the agreement the province will invest $200,000 over the next five years in the Rick Hansen Foundation to help make P.E.I. communities more accessible and inclusive for Islanders with spinal cord injury (SCI) and to support research for a cure.

“In September 1987, Rick Hansen pushed his wheelchair across Prince Edward Island and shared his dream with Islanders as part of his amazing Man in Motion Tour around the world,’’ Binns said.

“Twenty years later, Prince Edward Island welcomes Rick Hansen’s return and we are proud to support his legacy through a contribution to his foundation and its mission.’’

Hansen said the contribution will support the needs of Islanders with spinal cord injury and make immediate improvements to the quality of life for people throughout the Island.

“Thanks to the leadership of Premier Binns and the power of collaboration with our partners at the Canadian Paraplegic Association of Prince Edward Island, we look forward to working together to ensure improved services for improved quality of life and provide solutions that benefit Islanders with spinal cord injury.’’

Speaking to reporters after the signing ceremony, Hansen said the funding provided by the province will be used by the Canadian Paraplegic Association to bring together a group of experts — generally referred to as navigators — who reach out into the community to address specific problems.’’

Explaining the role of navigators, he said that in the time immediately following a spinal cord injury a lot of effort is expended trying to help the person with that injury deal with their immediate situation and get back home. But after that many people are left to struggle on their own in their own communities.

Hansen said they want to reconnect those people with expert navigators who have knowledge and expertise to help them address their situation.

“And they’ll all be working together to be able to support the individuals that they find. We’re actually going to be linking that to a national network so that people here aren’t working in isolation, they’re connected to the rest of the country and can share their experience as well.’’

Hansen said the five-year partnership signed Thursday will help sustain this initiative but will by no means solve all the problems.

Earlier in the day, Hansen was invited onto the floor of the house to speak to the legislative assembly. This was the second time Hansen had been so honoured by the legislature. Only a handful of non-elected people have been invited to do so.

Spinal cord work is unexpected shocker: ‘This is a breakthrough’