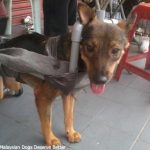 PETALING JAYA – Businessman Danny Goh Teck Chuan’s heart broke when he came across a few paralysed dogs after he started rescuing animals about a year ago.

Getting help for these dogs was hard, he said.

For instance, wheelchairs and walkers for the paralysed dogs had to be ordered from abroad.

The contraptions were also expensive, easily costing RM1,000 (S$400) each.

So, he decided to design his own wheelchairs and walkers for dogs based on patterns obtained from the Internet but unlike the ones there, which used aluminium, Goh decided to use polyvinyl chloride (PVC) pipes.

He also uses simple materials to fix wheels and stretchable material obtained from his shop to make the wheelchairs.

Goh, 29, who owns and runs a drapery business, said each wheelchair or walker cost him about RM15 to RM20.

So far he has made four wheelchairs and a walker for dogs that suffer from spinal cord injury and charges nothing for his creations.

“I’m willing to provide wheelchairs and walkers to anyone with dogs and cats that cannot walk,” he said

One of the dogs Goh built a wheelchair for is a one-year-old male named Lucky that suffers from spinal cord injury as well as severe nerve damage to one of its back limbs.

It was difficult to fit Lucky with wheels as the dog was unresponsive and uncooperative.

“Lucky barks at his back legs as if he hates them. He is a very unhappy dog and we hope this will change once he learns how to move around with the wheels,” said his rescuer and fosterer Leslie Chan.

Lucky and his siblings were rescued from Cyberjaya earlier this year. It is believed Lucky might have hurt himself crawling in the drainage system.

Goh can be contacted through Malaysian Dogs Deserve Better’s Facebook page at http://www.facebook.com/MalaysianDogsDeserveBetter.

Linux on Power from IBM for Critical Stem Cell Research

Rollin’ Down The Runway: What Happens When High Fashion Meets a...