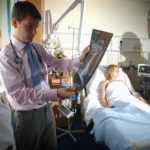 A NEW method of treating spinal cord injuries with the potential to reduce paralysis in patients has been developed by scientists in Scotland.

Researchers at Glasgow University and colleagues at the University of Liverpool believe the work could help develop treatments by using the body’s own natural resources.

They were able to envisage the innovative treatments by studying sugar produced in the body. The experts used data from previous studies which showed that scar tissue which forms following spinal cord injury creates an impenetrable barrier to nerve regeneration.

It is this that leads to the irreversible paralysis associated with spinal injuries in many patients – meaning if doctors can find ways to reverse it, paralysis could be slowed down or prevented.

The researchers found sugars, called heparan sulphates, play a significant role in the formation of scar tissue in patients with these injuries.

The scarring is a result of the activation, change in shape and stiffness of cells called astrocytes, which are the major nerve  support cells in the spinal cord.

The Scottish team found one possible way to repair nerve damage is to transplant cells from peripheral nerves to affected areas. But the experts discovered these cells secrete heparin sulphate sugars which promote scarring and reduce the effectiveness of nerve repair.

But significantly, they found this over-activation could be slowed down or stopped by chemically modified sugars which they produced in labs.

The university team believes the man-made sugars could be used to prevent the scarring and open up new opportunities for treatment of damaged nerve cells.

Professor Sue Barnett, from the University of Glasgow’s  Institute of Infection, Immunity and Inflammation, said: “We had already shown that neural cells, identified as having the potential to promote nerve regrowth, induced scarring in spinal cord injury.

“Now that we know that they secrete these complex sugars, which lead to scarring, we have the opportunity to intervene in this process, and promote  central nervous system repair.”

She said the findings had the potential to help discover new ways for manipulating the scarring process which occurs in spinal cord injury and improve the effectiveness of cell transplantation therapies.

The technique could be used to treat a range of patients including people seriously injured in car crashes, those with sports-related injuries, and victims of assault and serious falls.

Every year around 120 people in Scotland suffer a serious spinal cord injury which leaves them paralysed. The research is published in the Journal of  Neuroscience.