Split second can change a life 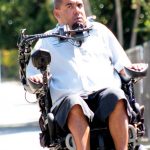 CAPALABA’S Patrick Dillon knows that a split second is all it takes to change your life.

A diving accident five years ago resulted in quadriplegia.

Ahead of Spinal Injuries Awareness Week (November 11-17), Patrick is sharing his experience of what having a permanent physical disability is like, with the aim of both preventing injuries and raising awareness about spinal cord injuries in the community.

“The biggest thing when I first sustained my injury was the frustration of not being able to do things that used to be so easy,” Patrick said.

“And moving back in with my family after having been out of home for more than 13 years was a huge challenge. But, with time, you adapt and you work out a way to live as independently as you can.”

At the time of his accident Patrick had just finished his first week in a good job at a mine. Relaxing with some mates on the weekend, they went for a swim in the Dawson River to cool off.

Patrick decided to have a go on a rope swing and swung out four or five times before one final swing saw him land head first and hit something under the water.

“I knew something was wrong immediately. I was underwater and couldn’t move my arms and legs. I swallowed water and drowned,” Patrick said.

“My mates on the creek bed were frantic trying to find me. When they did find me they managed to revive me. From then on I only know what I have been told I had broken my neck at the C4, C5 and C6 level, and was airlifted to Rockhampton Hospital, before being moved to the Princess Alexandra Hospital here in Brisbane.”

During those transitions between hospitals and throughout his surgery, Patrick’s heart also stopped working five times.
See your ad here

“I spent two months in the Intensive Care Unit, with a lot of complications and setbacks. When I was finally well enough to be moved to the Spinal Injuries Unit, I was told I had lost the use of my arms and legs. I was in the Unit for 13 months,” Patrick said.

Using an electric wheelchair with a chin control for mobility, Patrick said while adjusting to a spinal cord injury was challenging, life went on and he now enjoyed working, and he also volunteers for the Spinal Injuries Association’s Spinal Education Awareness Team (SEAT) program.

“Through my role with SEAT I talk to students from Prep to Year 12 about my experience and encourage them to think of the consequences of their actions,” he said.

“A split second is all it takes to change your entire life and often, spinal cord injuries can be prevented.”