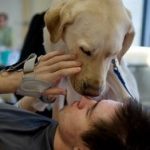 Christian Maynard was just being a kid, a normal teenager having a good time, when it happened. In a flash. So fast he didn’t know what hit him.

He was riding a motorcycle, towing a dune buggy loaded with friends, when he hit some gravel and flipped. The dune buggy ran right over him, breaking vertebrae in his neck and back.

He couldn’t move. Friends called for help. Ten days later he was at the Shepherd Center, a rehabilitation hospital in Atlanta.

With the help of experts there, including two specially trained dogs, it wasn’t long before he was showing improvement. It’s been almost a year since that Thanksgiving eve accident, and Christian now can lift weights, work out and stand up using parallel bars.

“I’ll be walking again soon,” says the 17-year-old from Titusville, Fla. “The doctors, nurses and therapists at Shepherd were great. And so were the dogs. They really helped.”

“If not for the dogs, especially Frosty, I don’t know what I’d have done,” Christian says. “I have four dogs at home. They gave me hope. They understand.”

That’s literally true, at least when it comes to speech. Canines understand up to 40 words, says Rebecca M. McWalters, a registered nurse who works and lives with Frosty, a yellow lab.

Frosty is one of two full-time therapy dogs at Shepherd, both trained by the non-profit Canines Companions for Independence. The other, Bentley, works and lives with physical therapist Beth Sasso.

The women heard last summer that CCI wanted to donate two therapy dogs to Shepherd. They went to Orlando for training, returning with Frosty and Bentley.

“They do more than just comfort patients,” says McWalters. “They help open relationships between us and the patients. I’ve seen patients who won’t lift their arms as much as their therapists believe they can. Then they raise their arms to touch Frosty. The patients just love the dogs, who are here all day helping us.”

Sasso says Bentley somehow helps patients who have problems with fine motor skills. Also, patients can hold Bentley’s leash and walk him while working on gait skills. And people get a psychological lift “when there’s a little guy wagging his tail.”

Christian thinks the secret is that the dogs are “always there, they are friends whether you are happy or sad, they always make you smile. At first they thought I’d never walk again. But I’m close.”

His father Mike Maynard credits the dogs with his son’s “remarkable” recovery.

He is philosophical, realizing that what was most important to him almost vanished while he was watching a football game.

Cheryl Linden, a professional counselor in the Spinal Cord Injury Rehabilitation Program at Shepherd, says “therapy dogs bring comfort because they are not requiring something of the patient. The dog doesn’t look at you any differently or doesn’t judge you.”

Though he still can’t walk, Christian is optimistic.

A world running for a chance to walk again