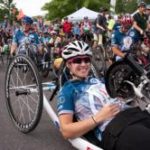 Kelly Brush Davisson, founder of the Kelly Brush Foundation, has been selected as one of 10 Athletes Who Care by Sports Illustrated magazine. Davisson, 26, started her foundation after sustaining a spinal cord injury that left her paralyzed after a ski racing crash.

Kelly Brush Davisson has been selected as one of 10 Athletes Who Care by Sports Illustrated magazine.

The magazine’s December 10 issue, on newsstands now, includes Brush Davisson on a list of athletes singled out for the charitable work they do off the playing field. Brush Davisson, 26, founded the Kelly Brush Foundation in 2006, following a ski racing crash that left her paralyzed. Despite her injury she remained active in sports, winning the women’s handcycle division of the Boston Marathon in 2011.

In the six years since its inception, the foundation has raised $1 million to support the foundation’s two-pronged mission to improve the quality of life for those living with spinal cord injury through helping athletes purchase adaptive gear and to improve ski racing safety by assisting race programs across the country in procuring safety equipment, such as netting to line courses.

“I’m humbled and honored to be included on this list,” Brush Davisson said. “This group of incredibly gifted athletes who choose to honor their achievement by turning around and giving back is an inspiration for me and the work of the Kelly Brush Foundation.”

The Kelly Brush Century Ride powered by VBT Bicycling and Walking Vacations is the foundation’s primary fundraiser. Held in September, the 100-mile ride through the Champlain Valley draws over 700 riders.

About the foundation: The Kelly Brush Foundation is a non-profit organization dedicated to improving ski racing safety, enhancing the quality of life for those with spinal cord injury(SCI) through providing adaptive sports equipment, advancing scientific research on SCI and supporting the U.S. Adaptive Ski Team. Kelly Brush, together with her family, started the foundation in 2006 after she sustained a severe spinal cord injury while racing in NCAA Div. 1 competition as a member of the Middlebury College Ski Team in Vermont. The Kelly Brush Foundation affirms Kelly’s ongoing commitment to live life on her own terms and better the lives of others living with SCI. http://www.kellybrushfoundation.org

Facebook
Twitter
Email
Mix
Digg
Previous article
Paralyzed but Determined to Walk, and to Help Others Too
Next article
Spinal Cord Injuries & Incontinence

SCI Prevention is Crucial to Decreasing the Impact on Individuals and...