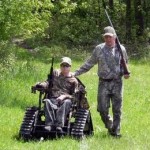 MADISON — A rare genetic disease may have taken away Kurt Johnston’s ability to hike through the rugged fields and forests of northern Wisconsin. But thanks to some new technology, it hasn’t kept him from turkey hunting.

Johnston is one of a growing number of people using all-terrain wheelchairs to expand their ability to live a normal life far from sidewalks and wheelchair ramps.

“That’s mainly why I bought it,” Johnston said of turkey hunting with his all-terrain wheelchair. “It’s cool. We tell everyone it looks like a tank.”

Johnston, 28, of Oshkosh uses a wheelchair because he has ataxia-telangiectasia disease, a genetic disease that affects his mobility. He was at a trade show last year when he spotted the ActionTrack chair.

After a test drive, Johnston purchased the machine, complete with a gun mount. He’s since bagged two turkeys.

“People have always wanted to be outside so it isn’t a new thing for people to want to be outside,” said Tim Swenson of Marshall, Minn., who designed and sells Johnston’s all-terrain chair. “But for people who are disabled, to be able to do the activities that they are able to do, that is a growing thing, very much so.”

Swenson’s son, Chris, has been a wheelchair user for 14 years, injured in a car crash. In 1999, the elder Swenson developed and now markets the tracked wheelchair that resembles a small tank.

It’s not cheap. Johnston’s chair, for example, cost about $10,000, not including accessories like a gun rack or rod holder. But for people who want to get outdoors, Swenson said, the chair can be priceless.

“Whether it’s some kind of sporting activity or hunting, car racing, being in the snow, being by the beach, there are all kinds of things that people haven’t been able to do until now,” Swenson said.

Don Christensen, a northern Wisconsin hunter with multiple sclerosis, has been running a website since 2004 that provides disabled hunters with information on assistive devices like all-terrain wheelchairs.

“It’s grown and grown since then,” Christensen said. “As people see that, and see the market that is out there, they are coming up with more and more adaptations.”

Josh Garubanda, a program manager at Wilderness Inquiry, a Minneapolis-based non-profit group that leads disabled people on outdoor adventures, said that while there are lots of new all-terrain wheelchairs on the market, but many people simply can’t afford to spend $5,000 or $10,000 on a chair they only use occasionally.

Christensen said sales are held back somewhat by the fact that insurance companies won’t pay for the chairs.

“An insurance company is not going to jump on board and buy a person an all-terrain wheelchair,” he said. “They are going to get them a wheelchair they can use in their house.”

Garubanda said Wilderness Inquiry owns off-road knobby-tired chairs that it lets people use on its trips. “We make it easier and take that accessibility barrier of not having the equipment away,” he said.

Jennifer Skulski, director of marketing for the Indiana-based National Center on Accessibility, said the majority of all-terrain wheelchairs aren’t electric, but are human-powered.

“There’s a wide variety on the market,” she said. “Each one is really dependent on the individual’s ability, what their functional limitations might be.”

Skulski said there is increasing diversity in the marketplace thanks to inventors who are devising ways for people to tackle tough terrain.

As more people take these devices off road, Skulski said it poses a challenge for agencies that regulate protected public wild areas. She said agencies must develop policies that prohibit gasoline-powered devices that could harm the land, while still allowing for people with disabilities to use assisted devices.

“They really (now) take a step back and look how they can balance the need for access for people with disabilities and considerations for the environment at the same time,” she said.

The effort includes signs that provide users with details such as a trail’s maximum grade, obstructions and the minimum recommended tread with to be used on the trail.

“It’s like an expanded version of a food facts label but for a trail,” said Peter Axelson, the firm’s founder, who uses a manual off-road hiking chair.

Kurt Johnston’s chair takes him new places. He’s used it on trails and fields in Wisconsin and over the soft sand of a Lake Superior beach. While there, he drove to the lake’s edge and dipped his feet into the water.

“This track chair will take him anywhere,” said his mother, Ann Johnston.

How Electrical Pulses Can Defeat Paralysis