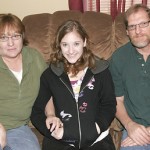 She’s paralyzed from her belly button to her toes but Aubrey Freeze was more than ready to return home.

After spending more than three months in hospitals, the Gothenburg High School senior was released from Craig Hospital in Denver, CO, on April 1.

Aubrey’s thoracic vertebrae was shattered in a single-car rollover during the early morning hours of Jan. 3.

On Friday, Aubrey sat on a couch in her living room—a wheelchair with pink accents positioned close by.

Her biggest challenge is adjusting to immobility especially during her senior year of high school.

Before the accident, the teen was busy with school, working at Runza restaurant, cleaning for Skyview Transportation, Inc. and hanging out with friends.

“I never would have pictured this,” Aubrey said, glancing down at her legs.

But on a lonely country road about a mile west of Joe and Diane Wahlgren’s house 10 miles west of Gothenburg, Aubrey remembers crawling to her wrecked car to keep warm after it flipped end over end and struck an embankment just west of Wahlgren Road.

All she remembers before the accident was over correcting the Pontiac Grand Am on Banner Road as it drifted to the side.

Even with a crushed verterbrae and two broken ribs, Aubrey said she was most frightened of freezing to death.

Temperatures early that morning dropped into the mid teens as Aubrey laid on the frozen ground for four hours.

Thaine remembers the many miracles surrounding that night such as Joe Wahlgren deciding to drive west of the family’s home the next morning around 8:30.

“He called us and said there’d been an accident,” Thaine said. “ We talked to Aubrey on his cell phone. She was crying.”

Until the call, Thaine and Junior thought their daughter had spent the night with a friend—never imagining her injured and drifting in and out of consciousness at the edge of a cornfield.

Junior said it was miracle Aubrey didn’t suffer from frostbite or hyperthermia or from other injuries such as head trauma.

“I’m grateful to be alive,” she said.

After being airlifted to Denver University Health Center, Aubrey underwent surgery to replace the shattered vertebrae. Four vertical rods were inserted to stabilize her spine.

After a second surgery, she developed lung problems and was on a respirator.

While at Craig—a rehabilitation center specializing in spinal cord and brain injuries—she learned how to be more independent.

“They stress independence so Aubrey doesn’t have to have someone around all the time,” Thaine said. “At Craig, I had to fight to keep my hands off her when she was struggling to do something.”

Aubrey said she learned the importance of education and “getting back into life.”

She and her family also learned what happens to people with spinal cord injuries.

For example, Aubrey said it takes up to two years to recover from such an injury.

“Because my body is still healing, I get tired easily,” she said.

Aubrey also suffered from anemia or lack of enough healthy red blood cells and she still takes medicine to block the growth of calcium in the soft tissues of her body.

Known as heterotopic ossification, the process is normal when bones are broken but can cause pain, injury and loss of motion to people with spinal cord injuries.

Because pressure sores are also common, Aubrey has to be aware of sitting or lying in the same position too long.

While at Craig and upon returning home, she’s constantly adjusting to new circumstances such as realizing it takes longer to do things.

“Like getting up and ready and getting in and out of cars,” Aubrey said. “I can’t get up and go somewhere. I can’t walk around.”

Leaving Craig was bittersweet in a way.

“It felt like a safe bubble because everyone there was dealing with the same thing,” Thaine said. “We felt supported and safe when we heard other people’s stories.”

However when the family arrived home, they were greeted with a new deck complete with a ramp and widened driveway for wheelchair accessibility.

Inside, doors were widened, rooms painted and a new upstairs bedroom and bath renovated for Aubrey.

The work was completed by friends, family and members of the Evangelical Free Church which the Freezes attend.

“We’ve been so touched,” Thaine said. “And we knew we had a great support group willing to jump in and help.”

Aubrey planned to rejoin her classmates at school this week.

Because she kept up on schoolwork while hospitalized, she expects to graduate with the Class of 2009.

After that, Aubrey plans to keep living life one step at a time—figuratively and literally.

She also wants to walk again.

Her biggest lesson so far?

“Be appreciative of what you have because it could be gone in seconds,” Aubrey said.