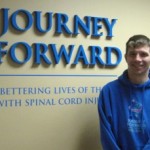 Dan Cummings enjoyed playing sports as he grew up in Hyde Park, especially football and baseball. He played defensive tackle and was on the kick return team at Xaverian Brothers High School, which won the MIAA Division 1 Super Bowl in 1998.

He dove into shallow water, opened his eyes and realized he couldn’t move. His friends pulled him out of the water and called 911. He was taken to Boston Medical Center and after spending three weeks on a ventilator, he began to breathe a little on his own. Doctors told his family that he was going to survive, but as a C6 quadriplegic he would never walk again.

Once he left the hospital, Cummings worked toward his goal of getting out of his wheelchair and using his legs again. His insurance company approved three weekly sessions with a physical therapist, and on his days off he went to the South Shore YMCA in Quincy where he used a standing frame to hold himself up. But he was frustrated.

“My insurance kept cutting me off,” he said. “My physical therapists were teaching me how to live in my wheelchair.”

Cummings heard about Project Walk, a spinal cord injury recovery center in San Diego. He flew to Los Angeles, where his brother Jim lives and works in the film industry. The two brothers went to visit Project Walk together.

“Within five minutes of walking in, I knew that this was where I was supposed to be,” Cummings said. The center used a combination of staff assistance and a wide variety of equipment to help clients reach their goals.

Cummings wanted to move to California, but knew that he could only make the move once he was independent enough to live on his own. He returned to Hyde Park and spent the next 11 months learning how to dress himself, do the laundry on his own, and get a driver’s license. When he was ready, he flew to California, got an apartment and started working toward his goal. Just under four years later, Cummings was able to get around with a walker.

He came home with his new skills and a desire to provide the same opportunities he had found in San Diego to others with spinal cord injuries. “Boston is the capital of the medical field,” Cummings said. “I wanted to bring that progress home.”

Cummings founded Journey Forward, a 501(c)3 nonprofit organization in June of 2008. Located at 755 Dedham Street in Canton, Journey Forward is housed in a 10,000-square-foot facility, including 2,500 square feet of office space and a gymnasium area of 7,500 square feet where 65 clients spend one to nine hours each week using leg presses and therastride machines along with dynamic neural stimulation and vibration training to reach their goals.

New clients undergo a one-day evaluation that allows the staff of 15 to design a program for them. “Not everyone’s goal is to walk again,” Cummings said. “Some people want to be more independent. Everyone has different goals.”

The cost for clients is $100 per hour. Since most insurance companies do not cover the cost, one of the goals of Journey Forward is to provide financial assistance through fundraisers. Cummings said that fundraising efforts in 2012 enabled Journey Forward to pay the cost of two hours of weekly training for five individuals in 2013. Other money is used to purchase more pieces of equipment for clients to use.

Cummings has appeared in films, including Still We Believe in 2003 and Blessed: Still We Believe Two in 2007, both of which were about Red Sox fans. He threw out the first pitch at a Red Sox game from his wheelchair. He was invited to come back and do it again when he was able to walk out to the mound, which he did after returning from California. His story will be told in an upcoming documentary, Mile of Hope: The Dan Cummings Story.

Cummings has achieved a great deal in his own journey forward, but continues to set new goals for himself. “I’m still working out,” he said. “I want to be able to walk without my walker. I can’t carry anything when I use my walker.”

A Casino Night fundraiser for Journey Forward will be held Tuesday, March 26, from 6-11 p.m. at Kings Bowling and Entertainment in Dedham. Christopher Knight, who played Peter Brady on The Brady Bunch, will emcee the event. For more information on the fundraiser and Journey Forward, go to www.journey-forward.org.

Quadriplegic is living a full life