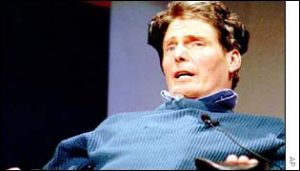 Scientists have uncovered evidence that actor Christopher Reeve could make a full recovery from paralysis if his spinal injury can be fixed.

Reeve, the star of the Superman films, was paralysed from the neck down after damaging his spinal cord in a riding fall seven years ago.

But doctors at Washington University School of Medicine in St Louis, US, have discovered that his brain has maintained a near-normal ability to detect feeling and movement.

This suggests that Reeve – and maybe others who have suffered spinal injury – may still be ready to pick up where they left off, should a treatment be found.

It had been feared that, without input from the nerves, the brain would start using those areas used to move and feel limbs for other purposes.

But in experiments, doctors found they could still activate the correct areas of Reeve’s the brain in response to touch.

Professor Harold Burton, who led the research, said: “Even though this individual had not been able to move for years, Motor patterns in the brain were relatively normal.

“That’s very encouraging, because it means that this part of the brain doesn’t disappear or lose its ability to function properly.

“The key might be that, though this individual’s injury was extremely severe, a small portion of the spinal cord is still intact.”

Experts believe that they are making genuine progress towards a method of repairing, at least partly, the damage caused by spinal injuries.

“However, the problem is that there is an awful lot goes on in the brain that is not to do with the final execution of movement – there could be a missing link somewhere.

“There are several groups working on ways to repair damaged spinal cord, and things are looking far more hopeful than they were five years ago.

“Our own group is planning to start clinical trials in people in between two and four years.”

Reeve was paralysed in 1995 after a fall that severed most of the nerves in the spinal bundle that carries signals between his brain and the rest of his body.

He started a concentrated programme of exercise and electrical muscle stimulation in 1999 and doctors announced earlier this year that the actor had slowly recovered limited sensation and movement.

Out of tragedy, a man finds his true calling