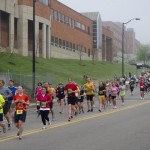 Paul Erway recognizes a big challenge, and he’s not one to back down from it.

Erway, a paraplegic since a car accident in 1980, is one of three members of the “50 Ability Marathon Team” affiliated with the Christopher and Dana Reeve Foundation dedicated to curing spinal cord injury.

Erway and two other wheelchair athletes, Grant Berthiaume and Aaron Roux, are attempting to compete in 50 marathons in 50 states in 50 weeks.

Sunday’s Covenant Health Knoxville Marathon will be the 13th marathon for the trio.

“It’s a big challenge,” Erway said. “You always need to have something to shoot for. Everybody needs goals.”

This will be the first year the Knoxville Marathon has had a division for push-rim wheelchair participants, or rim cyclists.

“We’ve had hand cycles, which has gears on it and is a little easier to maneuver on the course,” Knoxville Marathon race director Jason Altman said. “These are real wheelchairs. They don’t have gears. It’s more difficult (than hand cycles).”

It’s a challenge that doesn’t faze Erway and his buddies.

Erway came up with the idea for the “50 Ability Marathon Team” — along with Berthiaume and Knoxville wheelchair athlete Matthew Porterfield — while they were taking part in the Oita International Wheelchair Marathon in Japan.

The Oita Wheelchair Marathon is the premier event for wheelchair athletes.

“We came up with the idea, and it’s really taken off,” Erway said. “We were all thinking, ‘This is really going to hurt,’ but we thought it was a good idea.”

Erway was one of five featured speakers at Saturday’s Covenant Health Knoxville Marathon Health and Fitness Expo at the Knoxville Convention and Exhibition Center.

His story is inspiring.

Just four days before graduating college in 1980, Erway sustained a severe spinal injury that left him a paraplegic.

Erway, of Coudersport, Pa., didn’t let it lead to a life of inactivity. By 1982, Erway had started racing wheelchairs.

His teammates on the “50 Ability Marathon Team” have similar stories.

Berthiaume was left paralyzed from the waist down in a construction accident, while Roux was left with quadriplegia after a car accident while on leave from the U.S. Marine Corps.

One of their goals during the cross-country trip is to send a message.

“My hope is that people see what we do and get the hint, realizing that their disability isn’t the end of their lives,” said Erway, a rehabilitation products consultant for Knoxville’s Superior Van & Mobility.

Visit www.50AbilityMarathons.com to follow their progress of 50 marathons in 50 weeks.