Aiming high: Young accident victim keeps up his studies and his attitude 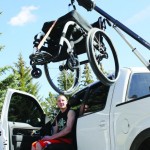 BUTTE — Who hasn’t done what Calven Goza did? But unlike so many, Goza paid a steep price.

On May 3, 2012, Goza, a student at Montana Tech, was socializing with friends. It was the end of a long semester, and Goza and a few friends were drinking at area bars. Somewhere along the line, however, things went terribly wrong.

The five friends were traveling east on Highway 43 between Dewey and Divide in a 2003 Grand Prix when the car hit a rock wall on the south side of the roadway. The car went airborne for about 68 feet and rolled several times.

Taylor DeBruycker, who was wearing his seatbelt, escaped without serious injury.

Goza, 24, had no such luck. He suffered a severed spinal cord, in medical terms what is a called T4 complete, and he’s now a paraplegic.

But though he doesn’t have the use of his lower limbs and needs a wheelchair to get around campus, Goza has returned to Tech this semester to continue his studies.

The young man has little memory of the accident, or the ensuing four days, but in a recent interview with The Montana Standard, Goza said he doesn’t regret the decision to hang out with his friends — a rite of passage for so many college students. He does, however, wish his friends had decided on a designated driver.

“Do I regret it? No,” Goza said. “I was out with my friends having fun, but did I make some decisions that weren’t the best?

Yes. Now, I’m trying to educate people to have a sober driver.”

Avoiding regret has helped Goza come to terms with what happened.

“I can’t complain,” he said. “It is what it is. Now you have to make the best of what you got. You have to have a positive outlook. If you look down on everything it’s sure not going to make it any easier, and it sure isn’t going to be fun. I look at the bright side of things and keep moving on.”

A native of Greeley, Colo., Goza lives off- campus with his brother, Lukas, and two other Tech students. He’s taking three classes toward his degree in petroleum engineering, and he said the school’s accommodations have made the transition easier.

“They’ve been completely on my side by getting me up here and making sure everything is accessible,” Goza said. “Whatever I needed done, the school has been more than willing to help out with. It’s made the transition a lot easier. It’s been great.”

Goza has always enjoyed working out, so the school recently purchased a piece of exercise equipment for the HPER gym that allows Goza to exercise from a seated position. Nick Bowsher, the HPER manager, said he’s come away impressed by Goza’s attitude.

“He’s a great kid,” Bowsher said. “I can’t imagine being in his situation, so young and not being able to walk. I don’t know many people who could deal with it like he has. He’s a real positive kid.”

Part of where Goza has drawn his strength is from his parents, Jay and Kathy Goza, who stayed by his bedside in the immediate days and weeks after the accident.

After being stabilized in Montana, Goza spent two months rehabilitating at Craig Hospital in Denver, a hospital that specializes in spinal cord and traumatic brain injuries. He said getting to know the other patients helped him adjust to his new life.

“I made a lot of friends in the hospital that had it a lot tougher than I did,” he said.

One of his doctors also helped his frame of mind. Dr. Bill Skelza provided a special bit of motivation, Goza said, because Skelza is also a paraplegic.

“He kind of showed me what I could do,” Goza said. “He was put in a wheelchair by a car accident too, when he was 16. Now, he has a family and a successful career. He showed me to keep my goals high and keep working at that.”

Goza’s medical bills have run close to a million dollars, and though he’s been covered by insurance, one of the items not covered but instrumental in helping Goza regain his equilibrium is his truck.

“I’ve always driven a pickup truck,” he said. “It was a huge step.

It’s a lot better than having a van.”

The truck, a 2012 Ford F150, has been specially fitted with hand controls that allow Goza to drive. The truck also has a specially designed front seat that allows Goza to get in and out on his own, as well as a crane in the bed that Goza controls by remote control. The crane hoists up and lowers Goza’s wheelchair. The re-design cost $17,000, but Goza said it was worth every penny.

Another adjustment to campus life has been dealing with snow, especially on Tech’s hilly terrain, but other students are always around and willing to help, Goza said. Not that he necessarily seeks their assistance.

Joyce O’Neill, who is a student life counselor and a disabilities service coordinator at Tech, said Goza has made no special requests.

“He’s a great kid,” she said. “I really think it’s important for him to be independent.”

In the future, Goza hopes to graduate and take an engineering job in the petroleum field. He worked in petroleum before attending Tech, and it was a job he loved.

“Most likely, I’ll end up in Denver or Dallas,” he said “That’s where the corporate offices are, and I think I’m more of an office guy now than a field guy. ”

And though memories of that night might be hazy, the implications of it aren’t settled yet. Myles Kittleson, who was 21 and driving the car at the time of the accident, faces a charge of vehicular homicide while under the influence. His trial is set to begin on May 21.

Goza doesn’t want to see his buddy go to jail.

For now, however, Goza is concentrating on his work at Tech, and he also hopes to open people’s minds about paraplegics.

“I know a lot of people haven’t been around spinal cord injuries,” he said. “I’m trying to teach people along the way the kind of the things I unfortunately had to learn. You can make it a positive experience.”