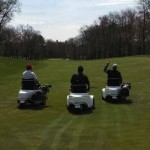 Two days after Patrick Shanahan was shot in his spinal cord, on July 16, 2010, during an attempted robbery in Hyannis and left paralyzed from the chest down, he was relearning how to breathe and go to the bathroom at Spaulding Rehabilitation Hospital in Boston.

Unannounced, another paraplegic who worked as a peer counselor at the hospital wheeled into his room and tried to pick up his spirits by insisting they would go golfing together someday using specially made wheelchairs.

Shanahan told him to get lost, but the counselor, Jerry Donovan, didn’t give up and wouldn’t let Shanahan quit, either.

“I love him to death for what he did,” Shanahan’s father Jerry said of Donovan. “He just wouldn’t take no for an answer.”

Donovan was correct about Shanahan being able to golf again. A 12-handicap before his paralysis, Shanahan has golfed more than a dozen times since October when he acquired a Paramobile, an all-terrain, heavy-duty wheelchair designed by Anthony Netto, a paraplegic from San Diego. In March, Shanahan took his Paramobile to Florida and played 10 rounds with his friends.

Last Monday, Shanahan, 45, of Suffield, Conn., and Donovan, 52, of Norwood, played seven holes at Sterling National County Club with another paraplegic, Mike Conrad, 30, of Framingham, Shanahan’s father and Shanahan’s uncle Bill. Netto, 50, who hasn’t walked since he was shot in the lower spine in combat in Iraq in 1991, rode along in a golf cart and instructed the golfers how to better operate their Paramobiles.

“I don’t feel paralyzed when I’m out on the golf course,” Shanahan said.

“It’s a dream. It shows you that anything is possible,” said Donovan, who hasn’t walked since he had a diabetic reaction while driving and his truck flipped over 13 years ago.

Before his injury, Shanahan coached golf and skiing at Suffield Academy, where he still teaches. Last month, Shanahan sank a 5-footer for par on 18 to shoot an 86 at Oak Ridge Golf Club in Agawam to beat a member of the Suffield golf team by a shot.

Paramobiles lift people from a sitting position to a standing position as they address a golf ball.

“When I’m standing up,” Donovan said, “my back pain goes away, I breathe better, I talk better. The mental part of looking at you eye to eye in the stand-up position means a lot to somebody who’s sitting in a wheelchair all the time. My circulation improves, everything improves. The human was designed to stand up.”

Using only his right arm, Shanahan hit his first drive 180 yards down the middle of the first fairway. Using two hands to putt, he sank a 9-footer for par to enable his team to win the second hole. On the final hole, he blasted out of a greenside bunker to within 2 feet and made the putt to win another hole. That’s right, the Paramobiles are made to drive on fairways and greens and even through bunkers.

“We put 50 percent less pressure,” Netto said, “on the greens than you guys do walking, and we don’t leave spike marks like you guys do.”

The Paramobiles weigh about 350 pounds and cost about $27,000. The battery lasts long enough to play 18 holes. Netto said he has sold about 400 of them.

Netto said his outdoor, heavy duty wheelchairs are used not only in golf, but in skeet shooting, fly fishing, bocce, ping pong and archery, and to shoot basketballs and pitch and hit baseballs. Netto uses his to walk his dog with his children and ride along the beach.

Netto founded the Stand Up and Play Foundation to educate and encourage people with paralysis or spinal cord injuries, or missing legs to remain as active as possible.

Jerry Shanahan, 69, of Concord is a member at Sterling National, and he arranged for his son and the other golfers to play on Monday. He’s also a volunteer for the Boston chapter of the Salute Military Golf Association in South Weymouth. The SMGA provides golf experiences for wounded war veterans. For more details, write info@salutemilitarygolf.org.

The Stand Up and Play Foundation works with such organizations as the SMGA to find corporate sponsors to help subsidize the cost of the Paramobiles. Visit www.standupandplay.org for more details.

Jerry Shanahan never expected to be able to play golf with his son again after he lost the use of his legs.

“It’s unbelievable,” Jerry said. “I get emotional over it. He’s a kindred spirit of mine. We’re goof balls, the two of us, and it’s just so much fun being out here with him like this.”

Lessons we learn from review of urological procedures performed during three...