Michelle Stilwell one of three B.C. MLAs with a physical disability 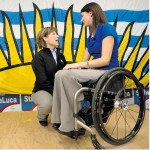 In much the way she views her wheelchair racing career – she is an athlete with a disability, not a disabled athlete – Michelle Stilwell isn’t overly interested in framing her new job as a politician by the fact she uses a chair.

The multiple Paralympic gold medallist won a provincial seat in her first try on Tuesday, holding on to Parksville-Qualicum for the Liberals.

With the election of former Vancouver mayor Sam Sullivan for the Liberals in Vancouver-False Creek and the re-election of Children and Family Development Minister Stephanie Cadieux, this time in Surrey-Cloverdale, B.C. now has three MLAs with a disability, the most of any province in Canada.

“Why should that matter?” says Stilwell, the tenor in her voice rising slightly when asked if that fact should be recognized. “If you talk to Sam and Stephanie, I’m sure it’s the same. I’ve never thought of myself that way. I use a wheelchair as a mode of transportation. It doesn’t matter what level of function I have, it’s about my ability and intelligence and determination.”

The 38-year-old mother of an 11-year-old son is fiercely competitive, a workaholic and an independent thinker who doesn’t want to be defined by anything other than what she can accomplish.

But as forceful a woman as she can be at times, there is also a softness to the charismatic Stilwell, who is an incomplete quadriplegic as a result of a fall backward onto some stairs while piggyback riding on a friend at age 17.

She says “the wheels are turning” – pun intended – when asked about what she faces over the next month in setting up shop as an MLA. And she noted that it was only in March that the B.C. legislature in Victoria finally opened a wheelchair accessible entrance through the front doors.

“It’s like they knew that three people were coming,” she says with a laugh. “You used to have to go in through a back entrance. It’s a positive step. It’s opening up one door.”

“It is of historic significance,” Chris McBride, executive director of Spinal Cord Injury BC, said of having three wheelchair users in the legislature.

“We’re thrilled for them. These are people who have accomplished a lot in their lives. They’re exceptional individuals to begin with.”

McBride said their election illustrates a greater degree of inclusion in the province. And he noted the fact that media reports throughout the campaign rarely mentioned the disability of Cadieux, Sullivan and Stilwell “says a lot about the education and the level of sophistication of people in the province.”

“The story is often about what they’ve done, not necessarily the challenges they’ve faced. I think it’s refreshing for our organization that they’re portrayed as a person first.”

Sullivan says there is a long tradition of advocacy in B.C. for people with a disability. Ex-Social Credit MLA Doug Mowatt, a quadriplegic who served in the legislature from 1983 to 1991, and Stan Stronge, a passionate builder of wheelchair sports in B.C, “are great heroes of mine.

“Terry Fox and Rick Hansen making disability sexy, and then having the (2010) Paralympics here, with people treating disabled athletes like heroes, and for good reason – this is the kind of thing that has led to three people in the legislature with a disability. There’s no jurisdiction in the world, that I know of, that can say that.”

McBride said it was “extremely curious” that the four politicians, including Kramer, all ran under the Liberal banner.

“I don’t know what that says, if anything, although it’s contrary to what some might expect given the stereotype that somebody advocating for social rights and freedoms, you identify that with the NDP. But these folks are not there because of their disability, so really their political affiliation is irrelevant.”

Stilwell, a native of Winnipeg who has lived in Parksville for more than a decade, won a gold medal at the 2000 Sydney Paralympics as a member of the Canadian women’s wheelchair basketball team.

She retired after that to start her family, then gravitated to wheelchair track when she resumed her athletic career in 2004.

Stilwell says one of her biggest challenges as an MLA is that most people know her only through the media as a Paralym-pic gold medallist.

“But people who have met me and spoken with me, they know there’s so much more. They see the values I bring, the strength and determination I’m going to show as an MLA.

“I am a workaholic. I don’t like unfinished. I need to keep doing until the job is complete.”

Her father, Heinz Bauknecht, told the Winnipeg Free Press this week that his daughter has always been that way. “I haven’t ever heard her complaining about anything. She just sets herself a goal and she goes for it. She’s quite an amazing young woman.”

Stilwell intends to compete at the IPC Athletics world championships in France at the end of July, but hints that may be it for her competitive racing career.

“Healthy active living will always be part of my life. But to what degree I can find a balance in life and work and family, that decision can’t be made just yet.

“I know in my heart, though, that I have achieved the highest levels in my sport and I love my sport.