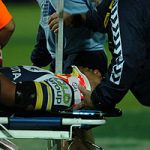 The Cowboys prop was left with no feeling in his arms or legs after accidentally colliding with the elbow of Brisbane winger Scott Minto when attempting to make a tackle in Saturday night’s 26-10 win at Dairy Farmers Stadium.

X-rays yesterday cleared the 24-year-old of structural damage to his spine but Dr Winter said Tanielu still hadn’t regained complete feeling in his hands and feet because of bruising to his spinal cord.

It’s the second time in four years Tanielu has suffered a serious neck injury. He broke his neck in 2003, at the age of 20, when playing for the Melbourne Storm and subsequently had to undergo surgery to rectify the problem.

“I think we’d all encourage him to seriously think about his future playing contact sport,” Dr Winter said yesterday, having earlier described the injury as the worst he’d seen in 11 years working with the Cowboys.

“He’s made some improvement but he still has some loss of feeling in his hands and feet.

“While there’s no bone damage it’s still a significant injury. It depends how it resolves (itself as to whether) he’s left with any neurological Impairment.”

Dr Winter said Tanielu, who was rushed to hospital on Saturday night after being stretchered from the field in a neck brace, was likely to have to remain in hospital for ‘a period of time’.

Thurston, who despite the prognosis was hopeful of returning to the field in three weeks, said he initially feared his season may have been over when his right kneecap popped out of joint.

“When I looked at my knee it was on the side of my leg so I thought the worst,” Thurston said.

“But the doc said it’s not that bad.

“I get (MRI) scans tomorrow and find out the extent of it.”

A cruel joke, a broken spine, a new purpose