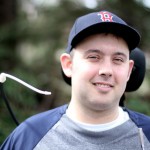 NORTH ANDOVER — The past two years has been a tough road for Chris Boshar.

He was paralyzed below his shoulders and confined to a wheelchair when he suffered a spinal cord injury after a diving accident on Lake Winnisquam in New Hampshire on July 2, 2011.

“Everything is a hard part; the loss of independence; the cognitive and physical disability, and the fact that I can’t feel the touch of my loved ones,” he said.

Yet Boshar, who will turn 27 on June 18, refuses to give up and is resolute that he will one day walk again.

“There are two roads you can take in life when tragedy strikes and I chose to have one with more good days than bad days,” he said. “With all the advances in science, I hope I can walk again. But I have to remember this is a marathon, not a sprint.”

Boshar said he finds strength in the support system made up of family, friends and former co-workers at Boston Capital. The group is hosting the Restore the Bosh walk, run and roll on June 8 in Chelmsford to help offset his medical bills.

The cost for taking care of a person with Boshar’s injuries ranges from $700,000 to $3 million over a lifetime, said his mother Kathy Boshar-Reynolds. His physical therapy alone is $40,000 to $50,000 annually, not covered by insurance. He sees a psychologist and has a home health aide paid for by insurance and MassHealth, respectively.

Boshar-Reynolds got a second mortgage to make her 1,400-square-foot ranch-style home near North Andover center handicap accessible. Family members and friends built a 830-square foot addition which cost $150,000, not including the free labor and other in-kind donations. The addition has its own entrance and a covered porch/portico. What once was the family’s sun room is now Boshar’s family room, there is also a large restroom so he can move around and an office where Boshar can work. Along the hallways are closets and storage areas as well as lots of windows throughout the house.

Boshar’s maternal relatives hosted a benefit and raised part of the $75,000 needed to purchase a handicapped accessible van. His father, Vincent and his family sought individual donations for the vehicle. Insurance paid for the $35,000 wheelchair.

Born in Chelmsford, Boshar graduated from Chelmsford High in 2004. He received a bachelor’s degree in landscape architecture from University of Massachusetts, Amherst in 2009. Boshar was an underwriter at Boston Capital, a real estate investment company.

Coworkers at Boston Capital, Inc. have been with Boshar during the difficult journey. After the accident, they paid for an air ambulance to take him from Boston to the Shepherd Center in Atlanta. They have also held fundraisers.

This past April, Boshar was able to get a service dog — a black Labrador retriever named Roddy — with help from Andover Animal Hospital. Hospital owner Diane Tower raised $5,000 through donations, bake sales and selling pet-supply products from a store that had closed. The other $5,000 needed was raised by local residents who donated from $25 to $1,500.

Roddy walks alongside Boshar as he goes on a 1-mile walk daily in his wheelchair. He also takes the dog to his physical training appointments and shopping trips with his home health aide.

“The support network is unbelievable and overwhelming. My optimism is empowered by them and restores my faith in humanity,” he said.

Boshar said the only way to repay all he has received is by “paying it forward.” This includes contacting family members of people who recently suffered spinal cord injuries, donating a portion of his proceeds to other causes and raising awareness about the injury at schools and service organizations.

He is also working on his own story based on what he learned from an older family friend, his maternal and paternal grandfathers.

“They are life lessons through the eyes of these three wise men. They taught me what matters most in life, which impacted me greatly and has helped me get through this,” Boshar said.

Meanwhile, his mother, Kathy Boshar-Reynolds, development director at Boys and Girls Club of Lawrence, said it’s difficult as a mother to see her only child in such condition.

“I get my strength from him. He was a very active 25-year-old and then tragedy struck. He still is active, he just found a new way,” she said. “I will never find another man that I admire most.”

For the past two years, Boshar-Reynolds said she has relied on her faith more than ever. She has received religious medals including St. Christopher, Mother Teresa and the Blessed Virgin Mary. She also prays with Christopher as they hold a relic of St. Elizabeth Seton, founder of the Sisters of Charity, the first religious congregation of women founded in the United States and a handkerchief from Medjugorje, where the Virgin Mary has been appearing since 1981.

“We live by family, faith and friends,” she said. “I pray to God so he can give doctors the intelligence, tools and guidance to find a cure and to give us the strength and fortitude to go on and to cure him,” Boshar Reynolds said.

How to help What: Restore the Bosh walk, run and roll featuring a 5K run, 1.5-mile roll, a 1.5-mile walk and a virtual run. There will be a DJ, face painting and members of the Keystone Club will sell baked goods with all proceeds going to the Boshar Fund. When: June 8, 10 a.m. to noon. Where: McCarty Middle School, 250 N Road, Chelmsford. Cost: $25 before June 5 or $30 the day of the event. Raffle to support Chris Boshar’s Recovery Prizes include two regular season tickets to the Red Sox with round trip limo and overnight stay at the Wyndham andover Hotel with breakfast; six-month gym membership to Lattitude Sports Club; two preseason tickets to either a New England Patriots, Boston Celtics or Boston Bruins game. Cost is $10 for one ticket or $25 for three tickets. Winner will be announced on June 11.

On anniversary of accident, paralyzed Severn man hopes for independence