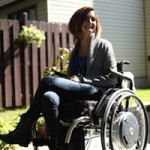 After suffering severe spinal cord injury in workplace accident, Natalie Barnhard has devoted herself to helping others with spinal cord injuries through her Wheels With Wings Foundation. She dreams of one day helping build a local rehab facility

Natalie M. Barnhard has a dream. Actually, she has three of them.

The most immediate is to continue helping other people with spinal cord injuries, through her Wheels With Wings Foundation that has raised about $115,000.

Her long-range goal is to help build a local rehabilitation and support center for people with such injuries.

And her third dream, one she has to be prodded to talk about, involves her recovery from her own catastrophic injury almost nine years ago.

Barnhard, 33, knows how lonely and frustrating it can be to cope with a life-changing spinal cord injury.

“The battle hasn’t been easy,” she said in the backyard of her parents’ Cheektowaga home. “It’s taken quite a few years to get where I am now emotionally, mentally and physically. I was very weak for a couple of years. It’s an injury that’s very hard to wrap your head around.

“You have to find a new way, a new purpose in life, a new passion, to get through it,” she added.

Surviving such a severe injury and knowing how difficult it is to endure, she has become almost obsessed with helping others:

“It’s a very rewarding feeling to help change someone else’s life,” she said.

Her own life changed drastically Oct. 22, 2004, while she was working as a physical therapy assistant and licensed massage therapist at an Amherst orthopedic facility.

A 608-pound leg-extension machine fell on her, resulting in a severe C5 and C6 spinal cord injury that left her a quadriplegic.

Buffalo attorney Thomas H. Burton, who suffered a similar injury in a motorcycle accident in 1993, noted that you need a purpose to survive such an injury.

“If you follow any Judeo-Christian ethic, you could not wish a catastrophic spinal cord injury on anyone, except maybe Hitler and his cast of characters,” Burton said. “I was incredibly lucky that I had a profession to go back to. My elixir is to stay too busy to feel sorry for myself.”

Barnhard has learned firsthand how little continuing support and intensive rehabilitation there are for people with spinal cord injuries in the Buffalo area.

While quick work by doctors at Erie County Medical Center helped save her life, she later spent 3½ months at two facilities in Atlanta. And she still spends about half her time in Atlanta, where she can get three hours per day of intensive, one-on-one physical therapy.

“There’s no support, no peer support, no advocacy program here,” she said. “You get hurt, and you feel lost. It’s very overwhelming. It’s a life-changing injury.”

Barnhard made headlines when her lawsuit against the exercise machine’s manufacturer, Cybex International, and Amherst Orthopedic Physical Therapy led to a jury award of $66.5 million.

An appeals court trimmed that figure to $44.5 million, before a settlement among the parties put the final figure at $26 million.

While that may seem an incredible windfall, a fact sheet on the Wheels With Wings website notes how expensive it is to live with a spinal cord injury.

Barnhard considers herself lucky that the settlement allowed her to provide for her own needs and medical costs, freeing up her foundation to help others.

These are specific grants that can pay for intensive rehabilitation, home or vehicle modifications, medical equipment and specialized rehabilitation equipment that, for example, can help people stand. That may seem small, she said, but any such gain is huge.

“Research is great, and I’m all for it,” she said, “but I want to help someone now who has been injured.”

Barnhard herself has made considerable progress. She now has movement in both arms, feeling down to her toes and an ability to eat, apply makeup, brush her teeth and push her wheelchair.

She credits her faith and her parents, Lee and MaryLynn, who knew when to give her space and when to push her.

Her wheelchair is part of her life, serving as her legs. But it doesn’t define her, she won’t let it control her life, and she won’t put limits on how far she can go.

“My goal is to never stop trying to progress,” she said. “In my opinion, the body never stops trying to heal. I want to keep myself healthy and in shape, just as I would if I were able-bodied.

“I’ve risen above my injury,” she added, “and that’s what I hope to help other people do – mentally, physically and emotionally.”

The foundation’s second annual Natalie’s Walk will start at 11 a.m. Saturday at Canalside, with registration for the 5K walk starting at 9.