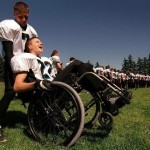 Logan Seelye doesn’t like to use the word paralyzed. After suffering a life-changing injury nearly 10 years ago at a summer football camp, the 26-year-old Spanaway resident has heard enough about what he might never do again.

Logan Seelye doesn’t like to use the word paralyzed.

After suffering a life-changing injury nearly 10 years ago at a summer football camp, the 26-year-old Spanaway resident has heard enough about what he might never do again.

He cares more about what he can do — and strive to do.

“Life is 10 percent what happens to you and 90 percent how you react to it,” Seelye said.

In July 2003, the high school junior collided with another football player in a freak accident during a scrimmage at a football camp. Seelye’s neck was broken, and he suffered a spinal injury that left him paralyzed.

Nearly a decade later, Seelye is married to his junior high school sweetheart, Jordyn. The two recently bought a house in Spanaway and are raising their 15-month-old daughter, Skylar.

He goes to the gym five days a week, drives a car outfitted with a left-footed gas pedal, and works full time as a Web designer at Pacific Lutheran University. He earned his bachelor’s degree at Central Washington University, where his accident happened, in four years and was elected to give the commencement speech to his graduating class.

“He is showing us that nothing is impossible,” Jordyn Seelye said. “I’m really lucky to have that.”

Leading up to the day he was injured, Seelye dreamed of playing Division I sports with hopes of making it to the NFL. He was already attracting scouting interest from universities, including Boise State and the University of Washington.

Seelye was a multi-sport athlete, mainly focusing on basketball and football. He was named captain of the Sentinels varsity football team his sophomore year, and played both safety and running back. When he wasn’t on the field, he was going to the gym, riding his bike for miles and playing video games.

After his accident, those activities stopped. But from the moment he lay motionless on the ground, friends and family say Seelye has never pitied himself.

Doctors told him he’d likely never have feeling or movement from the chest down. After months of intense physical therapy he slowly regained both.

In October 2003, he took his first steps since the accident with the help of a walker. Nearly a year after that, he used his walker to make his way across the stage to receive his high school diploma, before a screaming crowd of peers whose support has never wavered.

Seelye’s glass-half-full mentality is as strong as ever, and he has started a new effort to take charge of his progress.

In April, Seelye started an online fundraiser for a WalkAide, an experimental device that would help him walk easier without assistance and hopefully speed his progress toward learning to walk again.

“I always thought I’d get there anyway, but this device will help me get there much quicker,” he said.

Seelye lacks strength to lift his right foot, which leads to fatigue when he attempts to walk with or without assistance. The WalkAide connects to the leg below the knee and sends electrical impulses to the nerves and muscles of the lower leg, providing strength to lift the foot.

Without it, Seelye said he can take one or two wobbly steps; with it, he can take multiple, more stable ones. He used it for a weeklong trial period.

The WalkAide isn’t covered by Seelye’s insurance, so the online fundraiser seeks to raise $20,000. He also hopes to use part of the funds raised to start a scholarship for his former high school in order to give back to the community that continues to support him.

Seelye said support from friends, former classmates, anonymous donors and strangers has blown him away. The website had raised about $3,000 three days after its April 5 launch, and has raised more than $11,000 so far.

Jordyn Seelye said the WalkAide could help her husband do more things with their daughter.

“He wants to throw a baseball or a softball with Skylar, and with a WalkAide he’d be able to do that easier,” she said. “He isn’t just doing it for him, but he’s doing it for our family.”

With or without the device, Seelye’s goal remains constant.

The Seelyes have been married nearly four years. Jordyn Seelye has been by her husband’s side through all the struggles and milestones — sitting at his hospital bedside every day, attending classes, helping him relearn to brush his teeth.

She said his positive outlook plays a major role in his progress.

John Robak, who has coached football at Spanaway Lake High School for nearly two decades, meets up with his former player regularly.

“It’s amazing to see how far he’s come,” he said. “I truly don’t think there is anybody who could have handled this (situation) better than Logan did.”

Robak said he prayed like crazy after Seelye’s accident, and tears were flowing when he saw a video of his former player using a WalkAide.

Other fundraisers have sprung from the online effort. The Spanaway Lake football team raised about $12,000 after Seelye’s accident to help pay for medical bills, and now the team’s booster club is raising money to help him get the device.

Sue Mackey of Fife, a Cedarcrest campus safety employee, said Seelye’s accident broke her heart and that her students wanted to help him reach his goal. So far they have raised $625 by collecting change at lunchtime.

Fighting back tears, Robak said Seelye has always been gracious about the community’s overwhelming support.

“He is one of the classiest young men I’ve ever met,” he said.

Dan Seelye said he has never doubted his son will walk again, and his biggest hope is to see Logan walk daughter Skylar to the park.

For updates from Logan Seelye, a video of him using a WalkAide and to donate to his fundraiser, go to gofundme.com/help-logan-walk.

‘Some people don’t do a thimbleful of what he did in...

Everett has support from Utley, Byrd, Burroughs and others