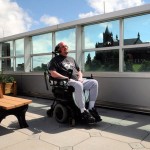 The 38-year-old was admitted Monday, making him one of the first patients in the VA’s new Spinal Cord Injury and Disorder Center, which is part of a $90 million, six-story addition.

Campbell liked what he saw.

“This part of the hospital was built for people like me,” said Campbell, who uses his head to control his electric wheelchair. “With two wars going on, there’s going to be a lot more of us.”

The VA will officially cut the ribbon for the long-awaited 30-bed center Friday. Eric K. Shinseki, U.S. secretary of Veterans Affairs, is coming to Syracuse to speak at the ceremony at 10:30 a.m. in the medical center’s auditorium. The dedication coincides with the 60th anniversary of the Syracuse VA Medical center and Flag Day. The event is open to the public.

“The work that began on June 14, 1953 helped to treat countless veterans over the years with the best medical technology available and that tradition continues with the opening of this … center,” said James Cody, director of the Syracuse VA.

The SCI center is the flagship of an addition that also houses an outpatient surgery center, seven new operating rooms and a new dialysis and infusion program. Construction began in 2009.

The need for more specialized spinal cord care in Upstate New York was identified when the VA did an assessment in 2003 of its facilities nationwide. That research found many Upstate veterans were traveling to New York City or Cleveland for care. The Syracuse VA was picked as the site for a new spinal cord center because of its location and expertise in neurosurgical and orthopedic services, said Dr. Stephen Lebduska, who’s in charge of the center. The new center is one of 25 in the VA system nationwide.

Veterans getting treatment and rehabilitation for spinal cord injuries need to be close to their families, he said. “One of the most important things in rehabilitation is preparing the family for accepting that new patient home again and getting the patient back to the community,” Lebduska said.

Only about 10 percent of spinal cord injuries are service related, Lebduska said. Car accidents are the No. 1 cause. The Syracuse VA also sees patients who’ve been injured in snowmobile, all-terrain vehicle and logging accidents, he said.

“They can suddenly go from being able to play football to being confined to a wheelchair,” Lebduska said. “The first thing that has to happen is they must change their mindset and have some level of acceptance of where they are functionally.”

Technology has made the outlook much brighter for veterans with severe spinal cord injuries. Some quadriplegic patients with the help of technology can get in and out of motor vehicles by themselves, drive and work, he said.

The new center also will care for veterans with multiple sclerosis and amyotrophic lateral sclerosis (ALS), also called Lou Gehrig’s disease. MS is a disease that involves an immune system attack against the central nervous system. ALS is a progressive neurological disease.

Patients in advanced stages of MS and ALS experience many of the same problems faced by spinal cord injury patients such as paralysis, spasticity, bladder problems and other medical issues. “We are the experts at taking care of these people,” Lebduska said.

Lebduska said it will take about six to 12 months before the new SCI center is operating at full capacity. The VA will send letters to Upstate veterans with spinal cord injuries who have been going to New York or Cleveland for care to let them know they now have the option of coming to Syracuse. “I suspect most of them will come here,” he said. “That could be several hundred.”

In addition to doctors and nurses, the new center is staffed by psychologists, physical and occupational therapists and other specialists. It will also hire an assistive technologist who will help patients with more sophisticated wheelchairs and other technology.

It has a therapeutic pool is heated to about 90 degrees and is accessible to patients with varying degrees of disability. Someone in the water up to their neck weighs about 10 percent of what they weigh on land, Lebduska said. “The water enables someone to stand and strengthen their muscles,” he said.

There is a large outdoor patio on the roof of the new addition that the VA calls a “therapy terrace.” It’s equipped with ramps where patients can practice navigating their wheelchairs before they go home. It also has stone and grass areas where rehab patients capable of walking can practice walking on different types of terrain.
The patio is decorated with potted plants and flowers patients can tend to. It’s also equipped with a gas barbecue grill and picnic tables for use by patients and their families.

“It’s a nice fun environment where patients can get out and enjoy themselves,” said Becky Ross, a recreation therapist.

Jeffrey Campbell first developed symptoms of multiple sclerosis in 1997 when he was stationed in Bosnia. Since then the disease has gotten progressively worse. He has not been able to walk since 2006. He was admitted to the Syracuse VA eight times last year when his MS flared up.

“I wouldn’t wish this disease on anybody,” he said.

Campbell said he’s anxious to work with the rehab professionals in the new center.
“I’d like to try to walk again,” he said. “I know it’s not a reality, but I’d like to try.”