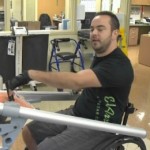 AUSTIN — It can happen in the blink of an eye and change your life forever. Dealing with the physical, emotional and financial effects of a spinal cord injury can be difficult for many patients. One victim from Austin has taken a hands-on approach to helping others just like him.

Daniel Curtis, 31, says he was just like like any other spinal cord patient right after his injury occurred. He had questions about coping, and he mourned the loss of his mobility. However, he says it was equally important to realize it was time to move on and pay it forward.

Curtis has been a regular at the Seton Brain & Spine Recovery Center since his diving accident two years ago.

“I shallow dove into my backyard pool just like I had a million times before,” said Curtis.

Unlike those previous dives, Curtis hit bottom before he could react.

“I ended up breaking my neck and shattering my sixth cervical vertebrae,” he said.

He was paralyzed from the neck down. Extensive rehabilitation has helped him regain significant range of motion in half of his body. Still, the memory of his inability to move is fresh in his mind.

“That whole experience, going from a very independent young man with a great career and everything I wanted to having to rely on others so dearly, really opened my eyes,” said Curtis.

So whether it’s before or after his rehab session, Curtis makes his way over to the Intensive Care Unit at University Medical Center Brackenridge.

“Every time I roll in there it’s always an emotional experience,” said Curtis.

“We communicate kind of through tears sometimes,” said Curtis.

Through the tears and serious talk, there’s also some lighthearted moments.

“Get your lungs going, so you’re able to come off the tracheotomy,” Curtis said to Dealing. “You and I will then be able to have a real conversation, and you can tell me how annoying I am.”

“When you are able to see outside of yourself rather than see the world as just you, that’s always therapeutic and curative in ways that are difficult to quantify,” said Roger Parthasarathy, M.D., General Medicine.

Curtis says his encouragement is simply a way for him to pay it forward.

“It’s something I want to do forever if I need to, or at least until we find a cure,” said Curtis.

You can pay it forward with Daniel Curtis at an event Aug. 8. Click here for more information.

The smile his parents could not live without