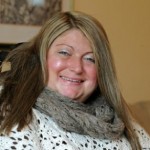 WHEN Hannah Rose was left paralysed in 1999 after a virus damaged her spine, she knew life would never be the same.

But now the 29-year-old has proved an inspiration with the release of her tell-all memoirs – Hannah Same Both Ways.

“I started writing the book two years ago,” explained the Chester Road resident.

“My Grandpa Lou had been telling me to do it for ages and I decided I really wanted to write everything down.”

Hannah was able to write the book with the help of her close friends David and Susan Mitchell.

“I would never have been able to do it without them,” said Hannah.

“They have made it possible for me to write it all down.”

In 1999, doctors diagnosed Hannah’s condition as an auto-immune disease that affects just one in a million people, after she complained of a pain in her back.

Just days later she was paralysed and on a ventilator in intensive care at Alder Hey Hospital, where she stayed for five months.

Despite the struggles she faced, the remarkable young woman was able to complete her GCSE’s and A-levels, before heading to university to earn a 2:1 joint honours degree in crime studies and film and television studies.

With the help and support of her family, Hannah was able to put her studies to good use, landing herself a job with Cheshire Police where she now spends three days a week working as a vetting officer.

Hannah added: “I have a great group of personal assistants at work and wonderful friends and family – they’re amazing.

“None of this would have been possible without them.”

Hannah hopes her book will help others to come to terms with life-changing events like her own.

She said: “Writing the book has really helped me and I’ve learnt quite a lot from it and it has made me realise how far we have come as a family.

“People say I’ve done so much but I just try to do everything that I would have done had this not happened and I just hope the book can help other people who may be going through similar things.”

Mum Fran, 61, said: “I’m really pleased that Hannah’s wrote the book. It’s something she’s wanted to do for a while and I think people reading it will realise how positive it is. I’m so proud of Hannah – we all are.”