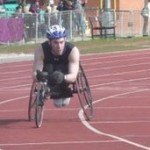 Life without pain would be “incredible”, says 24-year-old Justin Levene from London.

“It would be nice to have a bit of variety.”

Three years ago, two days before his 21st birthday, Justin coughed and then collapsed with acute pain in his back and down his legs.

He had suffered a herniated disc with severe nerve damage which left him in constant pain.

After several years of surgical procedures, including undergoing spinal fusion, the damage to his spinal cord left him unable to walk.

“After the last operation I came home to my mum’s and spent several months in bed. I had to crawl upstairs and wear back braces permanently.

“I couldn’t lift anything heavier than a glass of water. I just wasn’t doing anything – apart from a lot of origami, reading and listening to music.”

It took every ounce of willpower to embrace his new life and get mobile once more, this time in a wheelchair.

In the end it was his passion for sport which helped him to regain some of the independence he had lost since the day his life changed.

For Justin, this means playing in the first division of the national wheelchair basketball league, competing in this year’s London Marathon and aspiring to be a Paralympian.

While trying to qualify for the marathon, he was spotted by gold-medal winning Paralympian David Weir’s coach, Jenny Archer, and asked to join the Weir-Archer academy in Kingston.

“Going down there gives me a purpose and has been keeping me sane recently,” he says.

“Unfortunately, pain killers are no use to me so I do anything I can to take my mind off the pain.”

When he is not racing, he has hospital treatment for his on-going symptoms which include spasms, chronic pain, sweating and a paralysed stomach which causes nausea and vomiting.

“I throw up a lot. I can’t eat anything larger than the size of an egg or I bring it back up,” he says.

“I have to eat very small amounts regularly, around every 3 hours.”

He is also studying for a law degree with the Open University “to keep my mind going”, and would desperately like to find a job, but he acknowledges that sitting at a desk all day would be too painful.

And he still hopes he will walk again one day.

Every eight hours someone is told they may never walk again – and the vast majority of people affected by theses injuries become wheelchair users for the rest of their lives.

Robert Lee, consultant orthopaedic and spinal surgeon at the Royal National Orthopaedic Hospital, says the spinal cord is not something that can be easily fixed because of the nerves inside it.

Paula Craig was 37, and working for the police, when a car knocked her off her bike while she was training for a triathlon.

She spent more than five months in the Royal National Orthopaedic Hospital at Stanmore because of her injuries, and a further six months recovering at home, but she has not looked back since.

“I knew I was paralysed from the waist down immediately and I think that helped me. I came to terms with it quickly,” she says frankly.

She has been promoted twice since the accident 12 years ago, reaching the level of Detective Inspector within the Homicide and Serious Crime squad, and has recently started working for the Professional Standards Unit.

Triathlon and marathon-running were Paula’s passions before her accident – and they still are now.

Just 11 months after her spinal cord injury, she completed the wheelchair marathon in London, becoming the first woman to finish it as an able-bodied and disabled athlete.

But life hasn’t always been easy, she admits.

Recently she spent six months in hospital being treated for bone infections, the result of abscesses which she cannot feel. Because she can’t sit on her wound, she can’t get out of bed until it heals.

Yet she filled that time purposefully, studying and sitting exams for a degree in psychology and criminology.

“People say ‘that must be awful’ but it’s not going to get worse. I don’t walk – but that’s as bad as it gets.

“I wouldn’t change it now. I’ve met some wonderful people over the past 12 years.”