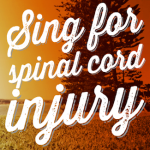 Jae, formerly of prominent punk band Lost In Line and now a successful acoustic artist in his own right, kicked off a fund-raising campaign called Sing For Spinal Cord Injury this week.

He will upload 30 acoustic cover songs to YouTube in 30 days, to support a drive on crowdfunding website FundRazr to raise money for Sargood, a spinal cord rehabilitation centre on Sydney’s northern beaches.

“I play all the time, so I thought I could upload a song a day and get it going to raise money and awareness,” he said.

The cause and centre are close to Jae’s heart. His sister Heidi became a complete T4 paraplegic as a result of a motorcycle crash in 2009.

Heidi said Sargood, on Collaroy Beach, was designed to help give independence and confidence to people who had suffered a serious spinal injury.

“It will help the process of leaving hospital and coming home. You spend about six months in hospital after that injury, so it’s hard to face the outside world again,” she said.

“There’s lots of things you need to learn that they can’t teach you at hospital.”

The centre is due to open next year, and Jae’s campaign is aiming to raise $3000. Since beginning the FundRazr drive on September 1, he has uploaded covers of songs by the Gaslight Anthem, City and Colour, and Israel Kamakawiwo’ole’s Somewhere over the Rainbow. At the time of going to print, they had raised almost $1800.

Jae said he wanted to help the centre to help people like his sister.

“It was a long recovery for her,” he said.

“She spent months in hospital and had to get her life back together again.”

“It’s something I’ve wanted to do for a while there, and I’ve been motivated by her speaking at a lot of events in Sydney.”

Heidi works at Sargood, on Collaroy Beach, as an administrative assistant and said she was amazed at her brother’s campaign to raise money for the centre.

“When my accident happened, Jae was in a different country and he wasn’t involved as he wanted to be,” she said.

“It’s so great to have your family involved,” she added.

With almost two-thirds of the funding goal already achieved and the campaign to run until the end of this month, Jae and Heidi have set their goals even higher.

When a cure isn’t a cure: searching for miracles can do...