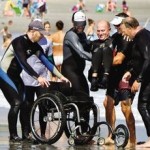 It took the help of four volunteers at Hampton’s North Beach to lift Major out of his camouflaged wheelchair that was outfitted with tank-like treads to navigate the beach, and more than a dozen others to help him get safely on the surfboard and catch some waves.

But he did it, thrilling the Hit the Beach volunteers and onlookers by riding more than a few waves into shorewhile sitting upright on the board, despite the traumatic brain injury he suffered on active duty as a U.S. Navy Seabee, and despite the fall a few years ago that left pools of blood on either side of his brain and ruined his sense of balance.

Major and more than 40 other military veterans, many with disabling injuries to their spinal cords or legs, surfed North Beach on Friday as part of the sixth annual event put on by American Legion Post No. 35, the Wounded Warrior Project and New England Disabled Sports.

Major, who has lived in Hampton for eight years, doesn’t talk much, but he didn’t need to verbalize what a good time he was having out on the water. His grin stretched from ear to ear as volunteers lowered him down into his wheelchair after his first round of surfing.

“The smile says it all, man,” someone said.

A moment later, Major turned to Michael Taylor, the event’s co-founder, and put his fist up for Taylor to pound it.

Major’s mother, Sally-Ann, said the turnout of more than 100 volunteers was “amazing.” She pointed out that her son had 18 people with him all along his ride, then she cut herself off because she was so surprised to see her son going farther with each turn.

“That was a long way by himself. And he balanced,” she exclaimed. “My God. I’m amazed that he’s able to do that sitting up like that.”

Ralph Fatello, commander of the local American Legion post and the event’s co-founder, said the turnout was “easily” the best ever. He said Hit the Beach gets more and more popular every year. On Thursday, he said he had 28 Wounded Warriors signed up. By Friday morning, the number was 37.

“And then about a dozen more just showed up,” he said.

Fatello, a Marine veteran of the Vietnam War, said that when he was in Vietnam, “I just wanted to get out of there and go surfing. I didn’t have a girlfriend back home, I didn’t have a wife.” He said he wanted to create the event for returning soldiers in modern wars who felt the same way.

Brent Cote, a retired Air Force major with 18 years in the service who no longer has the use of his legs after battling cancer in his back, said that through events such as Hit the Beach, he is a better athlete today than he was before his injury. He skied 60 days last winter and also sails, rows, water skis and, for the third year in a row, he has surfed.

“Events like this and the adaptive programs are life-savers. They truly are,” Cote said, adding that such activities “pulled (him) out of a depression.”

Sally-Ann Major said it’s especially challenging for mentally disabled veterans such as her son, who don’t have the independence to run their own lives. Sometimes, she said, she “just doesn’t know how he does it day by day,” especially because she says he can remember life before his injury when he had a car, a girlfriend and a busy schedule.

“Let’s face it: Events like this don’t happen every day. Most days for him are just — days,” she said.

Dawn Macomber of Derry, who was in the Army in the 1990s, walks with the help of crutches after she was wounded in Desert Storm. But she, too, surfed for the first time Friday.

“It literally saves lives to get veterans out to events like this and get us out of our houses,” she said.

Local surf shops Cinnamon Rainbows, Pioneer’s, Summer Sessions and Zapstix helped the event by donating boards and wetsuits. The Hampton Fire Department marked the location of the event by displaying a giant American flag from its ladder truck dozens of feet in the air above the beach, and a few members volunteered by helping veterans in the water.

Then, there were the 100 or more event volunteers, many of whom took the day off from work to help out. But they got something out of it, too.

“I don’t know who enjoyed that more, him or us,” said one volunteer who helped Greg Major back into his wheelchair and then received a high-five from the excited ex-Seabee.

By Nick B. Reid