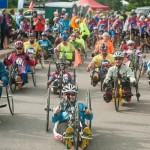 A record number of riders participated in Vermont’s largest charity ride, the Kelly Brush Century Ride powered by VBT Bicycle and Walking Vacations, helping to set a fundraising record for the ride on Saturday.

Over 750 cyclists, 25 of them using handcycles, started spinning from the Middlebury College campus in Middlebury, Vt. on a cool day perfect for riding through the scenic and rolling hills of the Champlain Valley. Riding in teams or individually, the cyclists raised more than $300,000 for adaptive athletes and ski racing safety.

“With the incredible generosity of our riders and sponsors, the Kelly Brush Century Ride Powered by VBT Bicycle and Walking Vacations has now raised nearly $1.5 million for adaptive athletes and ski racing safety,” said foundation President Charlie Brush. “With this support, the Kelly Brush Foundation is able to make a positive difference in the lives of those living with spinal cord injury, through helping with the purchase of specialized adaptive sports equipment. In addition, our supporters have helped put safety first in ski racing by underwriting the cost for over 400 miles of safety netting.”

Funds raised through the ride support the Kelly Brush Foundation’s mission to conquer the challenges of paralysis through love of sport by helping athletes with spinal cord injuries purchase specialized sports equipment. The foundation has awarded more than 60 grants for adaptive equipment, including adaptive gear for skiing, cycling, bowling, rowing and even horse carriage racing. Applications for adaptive gear grants are currently being accepted. For information visit the foundation’s web site: www.kellybrushfoundation.org.

In addition the foundation has helped put over 400 miles of safety netting onto race courses across the country and carried out a safety awareness campaign.

Donations are still being accepted and may be made through the foundation’s web site: www.kellybrushfoundation.org.

The ride was started by the Middlebury College Ski Team as a way to raise money to buy an adaptive mono-ski for team member Kelly Brush Davisson, who was paralyzed as the result of a ski racing crash. Brush and her family later founded a nonprofit, and the ride was opened to the public.

About the Kelly Brush Foundation: The Kelly Brush Foundation is a nonprofit organization dedicated to improving ski racing safety, enhancing the quality of life for those with spinal cord injury(SCI) through providing adaptive sports equipment, advancing scientific research on SCI and supporting the U.S. Adaptive Ski Team. The foundation has raised over $1 million and assisted in procuring over 400 miles of safety netting and other safety equipment for ski racing organizations as well as launched a successful public awareness campaign about ski racing safety. The foundation has also purchased over 60 pieces of adaptive equipment for paralyzed individuals, getting them back into the sports they love. Kelly Brush Davisson, together with her family, started the foundation in 2006 after she sustained a severe spinal cord injury while racing in NCAA

Div. 1 competition as a member of the Middlebury College Ski Team in Vermont. The Kelly Brush Foundation affirms Kelly’s ongoing commitment to live life on her own terms and better the lives of others living with SCI. www.kellybrushfoundation.org