Paraplegic man to compete in 10k 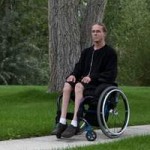 CEDAR CITY — September is Spinal Cord Injury Awareness month and one Cedar City man hopes to bring awareness to a condition he’s lived with for more than a decade.

When Jory Riggs was 18, a snow tubing accident at Woods Ranch, just east of Cedar City, left him a paraplegic. Since that time, he’s formed a new life for himself. He earned a degree in art from Southern Utah University and now, at age 30, he’s hoping to move beyond that label of paraplegic with the help of effective, though expensive, physical therapy — a move that has given him renewed hope about his future.

“It reopened my mind to what the possibilities could be,” Riggs said. “I resigned myself to thinking I’d only have muscle spasms until some medical breakthrough. It really opened my eyes.”

The therapy involves using and harnessing existing muscle spasms paraplegics often experience in their extremities that have experienced loss of function. Through carefully guided therapies, muscle memory connections are made that help, as Rigg’s mother Tina Dickinson said, renew the connections between mind and muscle.

“The differences I’ve seen in him are astounding,” Dickinson said. “He has better balance and I haven’t seen him in this little pain in years.”

Riggs said he was able to afford the therapy because he had a scholarship to the Project Walk Spinal Cord Injury Recover Center in Carlsbad, Calif. — one of the few places in the Western United States that offers this type of muscle memory therapy for paraplegics.

“I thought there was no hope for improvement in my quality of life,” Riggs said. “Now I know differently.”

Riggs said before his accident, he loved doing outdoor activities and spent his spare time helping his grandparents on the farm. These days, he is planning on participating in the 10K at the Cedar City Half Marathon and 10K this weekend as a fundraiser to help earn money so he can continue the muscle memory therapy.

Riggs keeps busy wheeling around town as he trains for the upcoming race by wheeling about seven miles several times a week as well as weight training.

Dickinson said the idea to use the 10K as fundraiser came after discussions with other paraplegics who are raising money for muscle memory therapy. Most insurances won’t cover any therapy that works to improve body parts that have loss of function from spinal cord injuries — only therapy that improves fully functional areas.

“They either have a settlement or fundraising to pay for the therapy,” Dickinson said. “There’s just no other way. It’s really expensive.”

Ultimately, Riggs hopes to recover enough to participate in the Special Olympics, get a job, perform volunteer work and — most importantly — be a completely independent member of society. While he doesn’t know if muscle memory therapy will allow him to walk normally ever again, he is optimistic that his life will improve.

“Whatever happens, happens,” Riggs said. “I’d like to get as much function back as I can.”

For information on muscle memory therapy or to donate to Jory Riggs, visit http://www.youcaring.com/medical-fundraiser/never-stop-pushing/83309.