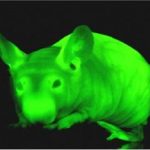 A POTENTIAL treatment for spinal cord injuries has been found in the most unlikely of places – mice hair.

The ground-breaking discovery, unveiled at the World Congress for Hair Research in Cairns yesterday, may give a glimmer of hope to those who cannot walk.

US and Japanese researchers have found a new source of stem cells in the hair follicles of mice.

The stem cells, discovered by chance by scientists from research lab Anticancer, based in San Diego, have been found to repair nerve and spinal cord injury in mice, allowing them to walk again.

Researchers stumbled on the discovery while examining the skin of mice, attempting to trace cancer cells.

Anticancer president Robert Hoffman, who is also a professor at the University of California’s medical centre, said when the cells were placed into the severed nerve of a mouse, it was found to eventually rejoin and regain its function.

In a remarkable video shown at the conference, a mouse with its spinal cord severed was filmed running about after it had been treated with the hair follicle based stem cells.