From Hope to How Soon? Paralympian and Gold Medalist, Victoria Arlen Sets Her Sights on Walking Again 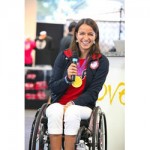 Paralympian swimmer, Victoria Arlen defies odds and comes back from a vegetative state to win gold at the 2012 London Paralympic Games. With the same determination competing in the pool, Arlen now focuses her energy at taking steps at the Project Walk Spinal Cord Injury Center in Carlsbad, CA.

It’s a parent’s worst nightmare when their child becomes severely ill and doctors don’t know how to treat it. For the Arlen family, that nightmare became reality when their then 11-year-old daughter complained of side pains which quickly turned to full paralysis and stumped doctors as to the cause of her complete vegetative state. It wasn’t until three years later that the Arlen family was told by doctors that their daughter had contracted Transverse Myelitis, a rare neurological disorder that left her dependent on a feeding tube and blinking once for “yes” and twice for “no.”

Today, Victoria, now 19, is a gold medal Paralympian who recently made headlines by challenging the International Olympic Committee’s decision to label her ineligible for IPC-sanctioned competitions because her physician mentioned the “hope of one day walking again.” In turn, Arlene was unable to compete at the Montreal 2013 IPC World Championships three days before competition due to the ruling that it was undetermined if Arlen suffered from a permanent disability despite being paralyzed from the waist down for the past seven years. Arlen set a world record at the 2012 London Paralympics, taking home the gold in the 100-meter freestyle and 3 silvers for the 400-meter freestyle, 50-meter freestyle and 4×100-meter freestyle relay. Now with her future as a Paralympian in question, Victoria has taken the latest hurdle as an opportunity to show the world there’s nothing wrong with the “hope” of one day walking again and she’s doing it at the Project Walk Spinal Cord Injury Recovery Center in Carlsbad, CA. Instead of hitting the pool to train, Victoria has found a home at Project Walk, the world-renowned spinal cord injury recovery organization where “hope” is the focus and intensive activity-based recovery backed by research is the tool to helping people regain the possibility of walking again.

This past Saturday, Victoria spoke at Project Walk’s 9th Annual Steps to Recovery event; a day dedicated to those able to leave their wheelchair to take steps on a red carpet before family and friends. Serving as the guest speaker, she spoke to a listening crowd of her tumultuous journey and the many challenges she has overcome to be where she is today. Wearing the 2012 gold medal around her neck, a bubbly Victoria spoke to the hearts of others in similar situations; describing a new dream beyond the swimming pool.

“I want to be walking,” said Victoria sternly. “I want to be out there doing what everyone said I couldn’t.” She adds, “Society has such an easy time telling people ‘no you can’t,’ when we should be telling people, ‘yes you can.’ Here at Project Walk, they never tell you ‘no.’”

Arlen watched more than 20 of her peers walk down the red carpet and complete their dream. Much like Arlen, many were told there was no “hope” in ever walking again and to try would be foolish. Not every client in attendance was able to participate in the walk. Many sat alongside Victoria with tears in their eyes, cheers from their mouths, and a common bond that they too will do everything possible to prove those wrong who said they never could.

“I will walk again,” says Victoria. “I believe all things happen for a reason and instantly I knew that Project Walk was where I was meant to be. They got me out of my chair and working out the very first day and I kept telling my Specialist, ‘give me more’ and he kept saying, ‘wait let your body adjust’ but I was just so excited.”

When asked if she had advice for others in similar situations she said without hesitation, “yes you can.”

SCI Business Solutions Inc. is the exclusive operator and franchisor of Project Walk and consists of a global network of franchised and licensed locations encompassing both for and nonprofit businesses. Headquartered in Carlsbad, California, Project Walk has locations throughout the United States and worldwide, serving thousands of clients in over 30 countries, on 6 continents.

Injured ATV racer battles his way back from paralyzing injury