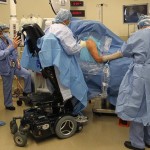 A successful Missouri surgeon has beaten unbelievable odds by returning to the OR after suffering sudden paralysis from the waist down.

Dr. Ted Rummel lost his ability to walk or stand when a blood-filled cyst on his spine burst in 2010. A year of intense rehabilitation later, he was back in the game.

Rummel even overcame the hindrance of sitting as he worked by utilizing an ingenious stand-up wheel chair.

Now, the tenacious orthopedic surgeon can do virtually everything in the OR he previously could and maintains his physical strength with daily exercise and his emotional strength thanks to a deeply devoted family.

Rummel told the Enquirer that his freedom despite his disabilities have been a lifesaver.

But the miraculous outcome wasn’t always a sure thing.

The surgeon’s troubles began in 2009 when he was diagnosed with a cavernous hemangioma, a type of blood-filled sac, on his spine.

Doctors fearful they might cause him immediate paralysis opted not to operate.

He lived with the cyst for 11 months until September 2010, when the sac ruptured and the necessary surgery he underwent thereafter left him numb from the waist down.

Suddenly Rummel, who practices in O’Fallon, Missouri, found himself going from performing 1,000 surgeries per year to not knowing if he’d ever work again.

‘One of my first thoughts was, “Oh my gosh, my life as I know it was erased,”’ he recalls. ‘Who you are out of the OR is gone and you have to redefine yourself.’

But the dedicated physician soon came to his senses and decided he’d be back in the OR no matter what it took.

A year later, that’s exactly what he did. The first surgery he undertook was watched over by another surgeon in case Rummel needed help. But he never did.

‘Very quickly it was apparent that his skills were still there,’ said Ann Abad, of Progress West Healthcare Center, where Rummel works.

Rummel began performing all the procedures he could from a sitting wheelchair: on hands, elbows, feet, ankles, and knees.

But he couldn’t perform he favorite surgery, on shoulders, because it required him to be standing up.

Undeterred, he beat that problem, too.

Now when the doctor performs shoulder surgery he does so strapped into a wheelchair that keeps him in an upright position.

So where does the doctor get his incredible strength? It’s not just from his rigorous workouts.

‘I have found the key is to communicate with family and loved ones. I got to know my family again, and I regret the time I wasted,’ he says. ‘The entire thing has made me phenomenally better with my family. It’s just been a very powerful experience.’

Specifically, he credits his wife Kathryn.

‘I wouldn’t have made it through any of this if it wasn’t for my wonderful wife,’ he says. ‘I am so grateful for her and my family, who I’ve gotten to know all over again.’

Rummel admits there are hard times, but he’s intent on looking toward the bright side and focus on doing good in the world.

‘When this happened to me, I had a profession, was well-educated, had resources, family and colleagues to support me,’ he says. ‘I know so many don’t have any of this, and I wrestle with how I can help others. One day I will.’