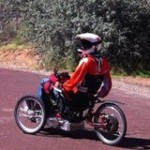 It’s all about mobility and independence, and the new Horizon electric tricycle — designed by a disabled psychologist — offers both.

In a reoccurring dream Chris Wenner had, he went to bike shops in search of something he could ride as a quadriplegic. “The dreams started about 10 years after my diving injury,” says Wenner, now a Tucson-based psychologist. “They involved different bike shops, but the understanding was always that if I could find just the right components, I could ride again.”

And now, thanks to a revolutionary new bike, developed by Wenner with high-end electric trike specialists Outrider USA, he’s not only riding again but planning a tour of 48 states. And Outrider has nearly reached its goal, through a Kickstarter campaign, to raise $100,000 by April 10 to put a unique plug-in bicycle for the disabled community (below) into production — by the end of this year. It’s another sign that electric bikes are finally starting to catch on.

The Horizon bike, for both on- and off-road, won’t be cheap — $8,000 is the target price — but it will be usable by both paraplegics and quadriplegics. Wenner, whose accident occurred in 1990, when he was 17, is a C5 or C6 quad, with only 10 percent of standard arm use, and 5 percent of typical hand strength. But he can ride his home-built bike (the model for the Horizon), and has already done epic runs from Tucson to San Diego (451 miles over four days) and Phoenix to Zion National Park.

“According to my research, perhaps a million people with mobility impairments could use a bike like this,” Wenner said. The bike might work for people with ALS, MS, prosthetic limbs, arthritis, or any kind of mobility issue (including older users who just aren’t comfortable on a regular bike anymore). There’s nothing like it on the market, oddly enough, so when Wenner (that’s him on the bike below) finally got on his bike in November 2012, it was his first bike trip in 23 years.

“The first ride was a bit scary, because the bike was held together with Gorilla glue and zip ties,” Wenner said. “But it was absolutely fantastic. Biking had been one of my passions, and I’d tried to find other things to fill the void, but nothing really did. There’s nothing like flying on a wheeled vehicle.” He said the experience closely recreates the fun he had on his mountain bike in high school, before the accident.

Jesse Lee is a co-founder of Outrider, which has been making top-end electric bikes — with full suspension, and capable of an impressive 100 miles on a charge of the lithium-polymer batteries — since 2009.

“The beauty of the Horizon bike is that it can be adapted to a wide range of physical abilities,” Lee said. “Chris doesn’t have the hand strength to work a throttle or brake, but he can work with our tri-pin hand controls. There’s absolutely nothing like it on the market, which really surprised us.”

One feature of the bike is a seat that rises and lowers electrically to line up with a wheelchair, making transfers easy. “Independence is really critical for the community that could use this bike,” Lee said. “It’s huge that people can do ride all on their own.”

The standard Horizon will have a range of 30 miles, with a 2.6-kilowatt/hour battery. Upgraded packs will be available for more range. The sophisticated suspension, with front a-arms and rear shocks to cushion the ride, is sourced from Serbia.

Many Kickstarter campaigns struggle to raise a fraction of their goals, but Outrider’s is already at 97 percent of the $100,000. At this point, production of the Horizon is assured, with the money going to develop the tri-pin hand controls, the adjustable seat height, and other unique features.

Wenner’s trip would be a milestone for a quadriplegic biker, but Outrider is after a hurdle of its own — a world electric bike speed record. The company will be trying to reach 80 mph, which would be a record for a bike weighing less than 100 pounds. Lee’s company’s (which he started with two friends) is kind of under-the-radar now, but if it sets a speed record and fields the world’s first bike for quadriplegics, it won’t be in the shadows anymore.

Help fund this project on Kickstarter