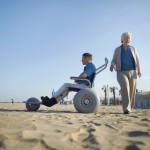 VIRGINIA BEACH Bill Fertig struggled with beach vacations for years. A motorcycle wreck 14 years ago left him a paraplegic. On a trip to Nags Head one summer, Fertig relied on a cumbersome wheelchair that even the strongest member of his family could barely push through the sand.

Fertig stayed back at the house so he wouldn’t be a burden while everyone played near the water.

He enlisted help from his son, Chris, a marine engineer for Maersk Line Ltd. After 2½ years and four prototypes, they developed Sand Rider.

The Fertigs will debut several models today and Sunday at the Mid-Atlantic Home & Garden Show. They can be found at Booth 130 inside the Virginia Beach Convention Center.

On Wednesday afternoon, Bill Fertig demonstrated Sand Rider on the Boardwalk and at the beach near 2nd Street. His wife, Noreen, and his son stood nearby.

Independence is important to Fertig, a retired police officer. Every day, he lifts himself in and out of his minivan, which he drives with hand controls. At 59, he’s a competitive hand-cycle athlete with strong forearms.

He sat in his traditional wheelchair beside a Sand Rider, moved the new chair’s armrest out of the way and transferred himself into it. Next, he used his hands to roll the two rear wheels forward and headed down a ramp into the sand. Sand Rider looks similar to a jogging stroller. It has two 19-inch wheels in the back and a 12-inch wheel in front. The polyurethane wheels are made by Wheeleez, which makes beach carts that roll easily over soft sand.

The wheelchair weighs about 50 pounds. The seat is 19 inches above the ground, and the footrest position is adjustable. The powder-coated aluminium frame includes handles at each end for pushing or pulling. For traveling, it can be separated into three parts without tools and placed inside a rolling duffle bag.

A standard Sand Rider costs $2,280. Frame colors can be customized. Add-ons include a parking brake, armrests, a seat belt and a cup holder that also can be used for an umbrella or fishing rod. A customer described it as a lounge chair on wheels.

Two Sand Riders are being used in the Virginia Beach’s Therapeutic Recreation Program, and two more will be available this summer for the public at Little Island Park in Sandbridge.

“We were looking for something that was easy to use and durable,” said Pete Hangen, who helps with swim, surf and boogie board camps for people with disabilities.

“Folks that have limited or no mobility, getting them over the sand into the water can be a challenge,” Hangen said. “The Sand Rider will make that a much easier process.”

By Stacy Parker
The Virginian-Pilot