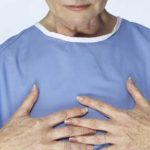 I try to follow guidelines set up by the medical community so when I turned 40, it was time for a mammogram. The only time I saw a mammogram machine was on television during “October is Breast Awareness Month”—a barrage of commercials and news flashes from the health expert during the six o’clock news. The only problem with the examination I saw was that every woman was standing. Now the ability to stand has not been in my repertoire since I broke my neck and damaged my spinal cord over 20 years ago. So I assumed that having a mammogram would be out of the question.

Breast cancer is predominant on Long Island. A little park there is adorned with a pink ribbon and a sign that says, “One of Nine.” I’m not very good at math but statistically speaking I could actually be the one in nine. The question is how would I know?

I started to make some calls to the local hospitals asking if the mammogram machine was wheelchair accessible. I was met with long pauses on the other end as the person seemed to be stupefied. I called the American Cancer Society and was met with, “I am only a volunteer here.” I would need to call the Radiological Association of America and investigate as they were the ones who designed the machines to detect the cancer in women.

I found it outrageous and appalling to think that I was the first woman using a wheelchair who needed a mammogram. I am finding that I am the first in many of the things that I do.

One of my local hospitals has a large breast cancer center. I decided to be a pioneer and make an appointment.

The day began without much fuss other than a little nervous tummy. I drove into the parking lot of the hospital. The handicapped spaces seemed to be filled by people who consider a handicapped placard the coolest thing since the Louis Vuitton pocketbook. I always arrive early for my appointments just so I can wait for one of these fashion victims to come to their car in time to watch me disembark from my ramp.

At the Radiology department, the clerk told me to have a seat in the general waiting room where I tried to be inconspicuous. I could feel the eyes staring at me, trying to assess whether I was there for chemotherapy or a broken bone. I was not in an explaining mood. I watched the clock.

Finally, my name was called. The mammography waiting room is very small. A television mounted overhead was playing Regis and Kelly. Neither of the two changing rooms was big enough to accommodate me in my power chair. I told the clinician I would just take my shirt off when I got to the examining room.

“OK, Elizabeth,” a tech finally said, “we’re going to go into the exam room now. Can you stand?”

At this point I figured I would have to turn around and go home with no one touching my breasts, but surprisingly, the mammogram machine does lower for people sitting.

I used to be a full B cup. Now I am barely a double-A. The technician placed two pasties on the tips of my nipples. I felt like a member of Cirque du Soleil. I lined my wheelchair up sideways so I could turn my body and place the delicate tissues of my breast into the center of two plates that would come together to crush it. The problem with having a double-A cup and no finger dexterity was that the boob did not wish to stay inside the squishing machine. The technician placed my arm up on one side of the machine and shoved me up close so that my chin rested on the bar, then she ran back behind the protective radiation wall.

Now we needed to do the left breast. I lined up the machine again with dangling footplates as the technician attempted to push my breast into the squishing plates. I had my wheelchair on. This was a mistake and should be learned for future reference. Always turn off the power switch when surrounded by children and x-ray technicians.

The technician in her attempt to assist me hit the joystick. “Oh my God!”

she blurted out. “Oh my God, oh my God!” I was now wedged between the mammogram machine and a 700-pound wheelchair. In her highly anxious state, she never thought to step back but continued to call on the Higher Power.

“Step back,” I suggested. I was surprised by how calm I was. I’m not going to lie: It really hurt. I felt as if my ribs were crushed. But I truly just wanted to get the thing done. The technician was shaking. My attempts to reassure her fell on deaf ears. She had to go get another technician to complete the exam.

Back in the tiny waiting room, Regis and Kelly were winding down. I sat with a couple of other women who, unlike me, were not losing their mammogram virginity. We all sat in silence. I wanted to chat about my mammogram and my sense of being a woman, my belonging to the group whose genetics gave us breasts and vaginas. But no one seemed willing to discuss anything. I wondered if maybe in the past they’d had bad mammograms. Then I began to think what if my mammogram is not good. Then I understood the silence.

An older woman sitting next to me got her results first. They needed to redo the right breast, she was told. I wanted to reach out and place my hand on top of hers to reassure her, but, apparently this is not the correct thing to do. Better to be in your own bubble and let others deal with their own issues.

The technician finally came back with my results. “OK, Elizabeth,” she said. “You can come back next year.”

I rubbed my side wondering if I should go to the emergency room for another x-ray while I was here and had a parking space. Or should I just go home and be thankful I’m not the woman in the other room.

EM Treston is a writer who lives on Long Island.