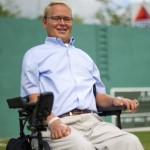 In 1995, 20-year-old Travis Roy was making his debut for the Boston College ice hockey team when 11 seconds into his collegiate career he mistimed a hit on an opponent and slammed hard into the boards, breaking the C4-C5 vertebrae in his neck. He has not walked since.

Last month, 22-year-old Alex McKinnon of the Newcastle Knights was playing his 49th NRL game and with 38 seconds remaining in the first half, was tackled by three Melbourne Storm players, lifted in the air and landed on his head, breaking the C4-C5 vertebrae in his neck.

Eleven seconds or 49 games, Roy and McKinnon may share the same fate.

Travis Roy can’t bring himself to watch the video of McKinnon’s NRL career ending. Can you blame him? It took a long time before he could even watch ice hockey again, let alone watch someone suffer the same fate as himself.

Early reports following McKinnon’s incident said he was a quadriplegic, like Roy, and would never walk again.

However, the most recent statement from McKinnon came via Twitter yesterday when he said: “I’ve come a long way in 4 weeks, lot’s of movement back in right & left arm. Hopefully will get a bit more movement in legs.”

Since March 24, McKinnon has undergone two operations to have a disc removed and to fuse his C4 and C5 vertebrae, including a bone graft with a piece taken from his hip to support his neck. Once the swelling subsides, McKinnon will discover whether he has a complete or incomplete injury – a fateful toss of the coin that will determine if his last steps were, in fact, taken on a league field.

A complete injury means the same fate as Roy – 24-hour care and life in a wheelchair. Either way, McKinnon faces a challenging 24 months.

After crashing head first into the boards, Roy was left motionless on the ice with his parents and older sister watching from the stands. He’s been motionless ever since.

“The word you hear… devastation,” Roy said from Boston. “It punches you in the gut. For me there was a lot of sadness involved. There wasn’t so much anger. Maybe my injury was a little bit different – I was initiating the contact and I just lost my balance. There was nobody to blame, not that I needed anybody to blame. It was just a fluke accident.

“For me it happened thousands of times but this time I just got the angle wrong.

“The initial feeling is really numbness. The sadness and emptiness … you just don’t really feel anything. You just know that your life is over as you knew it.”

Roy’s advice for McKinnon may sound cliched, but for someone who has gone through it all and is the head of a foundation for spinal injuries, it’s worth listening to.

“The thing that I learned in hindsight was there is a period where it doesn’t matter what anybody says. But at some point you’ve got to turn the corner and say, ‘Look, here’s the cards I’ve been dealt, here’s the situation – now it’s my choice’. Alex is going to have to deal with depression and wallow in self-pity and let that be it, or is he willing to take control of the situation and try to make the best of it? With today’s assistive technology you can live a very full life, which I never imagined quite frankly.”

Roy received a huge amount of letters from well-wishers after a Sports Illustrated article about his fateful day. The author of the article, EM Swift, then wrote a book called Eleven Seconds: A Story of Tragedy, Courage and Triumph and Roy does up to 50 motivational speeches each year around the United States continuing to tell his story.

With social media such an easy way for the average fan to get in touch from sports stars, the amount of support for McKinnon would be considerable and Roy said you really feed off it as you lie in hospital, helpless.

“There are a number of days that will go by where… you wait for the swelling to go down in the spinal cord and you’re waiting to see if your body regains any function or sensation and the mail, well-wishers and visitors help pass the time and to know people are thinking of you. It does mean a lot.

“But the one piece of advice I would have for Alex is down the road when he’s starting his physical therapy and starting his rehab and trying to put his life back together, the key is to just find one little thing that he can look forward to in his day. And then slowly you have a couple of things to look forward to in your day, then you try and add a third and you realise there is something I can still do even if I’m paralysed.

“Over weeks, months and years you keep looking for those things and keep adding things to look forward to in your life, and quite frankly this is true for able-bodied people. The more things you have to look forward to in your day or week or month the better quality your life will be and the more meaning it has. It can become a very productive life.”

Roy holds no ill-will against ice hockey, or any physical sport, or the combatants that test the limits in order to gain an edge.

“Most of us playing sports are capable of maybe pushing the boundaries a little bit and 99.99 per cent of the time we get away with it.”

It’s not about walking again for Roy, with two decades passed since his accident. A scientific breakthrough, if or when it happens, may even be too late for him due to the time he has spent in a wheelchair.

Just getting some movements in his hands would change his life completely. Post-accident it would take Roy up to three hours to just go through the morning routine of getting dressed, washed and having breakfast.

He has cut it down to a quicker routine now but still needs assistance throughout.

“I’ve been in my wheelchair for 18 years so I’m a little more concerned for me [if a breakthrough happened], as amazing as the human body is, 18 years in a wheelchair it could be pretty difficult.

“I only have a little bit of movement in my right biceps, I have no sensation above my shoulders but if they were able to give me back one or two levels, I’m a C4-C5 quadriplegic, I would be a C6-C7 quadriplegic all of a sudden I would have both my biceps, both my triceps. I’d have my wrist extensors, go down a little bit lower and you’re at the thoracic level. If I could move my hands, if I could close my hands, I’d be independent.

“I wouldn’t need 24-hour care to look after my things. If I could move my hands and my fingers, I’d live on my own again. I’d be able to feed myself, dress myself.

“That sort of breakthrough is certainly down the road and something I hope will occur in my lifetime. I’m 39, I can’t deny I’ve been disappointed with the research but progress is being made.

“You’ve got to just keep being patient.”

The Travis Roy Foundation gives 50 per cent of its proceeds to research into spinal cord injuries while the rest of the money goes to individuals with severe injuries who need extra funding and assistance. Roy said very little has changed in the terms of science since his injury but the technological advances have made living with a serious spinal cord injury more manageable.

The quality and durability of wheelchairs, along with voice technology, which has become mainstream, has made a phenomenal leap forward.

According to ACC more than 10 New Zealanders a year suffered serious neck and spinal injuries before the inception of their RugbySmart initiative in 2002. Since then the number has reduced significantly, culminating in zero for the 2012 rugby season.

“The disappointing part is the basic science hasn’t come further. They thought they were getting close 18 years ago but at the time they realised the problem was more complex than they originally thought. That’s what it is and they’re making progress.

“I do hope and do believe that there will be a medical or scientific breakthrough in my lifetime – certainly in Alex’s – there is no doubt in my mind that he will walk again in some way or another.”