Paraplegic man proves ‘anything is possible’ 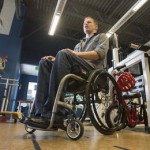 SALT LAKE CITY — While in his mid-20s, Dustin Shillcox learned that he would never walk again.

A car accident in August 2010 left him paralyzed from the chest down.

A few short years later, Shillcox is close to achieving what had seemed impossible: walking. He is the recipient of a pacemaker-like device that allows him to move in ways that were previously unimaginable.

He is the fourth person ever to have received an epidural stimulator implant through the University of Louisville’s Kentucky Spinal Cord Injury Research Center.

On Monday, Shillcox visited Neuroworx, a physical therapy facility in South Jordan that treats those with spinal injuries. With others in wheelchairs looking on, Shillcox — wearing a Superman T-shirt — turned on the implant to send electricity to select muscles. He then grabbed parallel bars and hoisted his body up so he was standing.

While was able to put full weight on his legs Monday, he still cannot balance well, can only stand with the stimulator on and has to hold on to something for support.

“I think (the implant) gives a reason to believe that anything is possible. So it’s exciting for the future for others with spinal cord injuries as well,” Shillcox said.

In January 2013, a box a little smaller than an iPhone was implanted in Shillcox’s stomach. A wire extends from the box to his spinal cord. When engaged, the wire sends electrical stimulation to Shillcox’s spine that allows him to move specific muscles.

Shillcox took a risk in receiving the implant because he had no guarantee that his condition would not get worse, according to Neuroworx co-founder Dale Hull.

“To be a pioneer, to me that’s akin to people strapping themselves in a capsule and getting shot up into space. He’s a medical explorer of sorts,” he said.

Hull would know. He was paralyzed while jumping on his backyard trampoline. A physician by training, he knew exactly what the pop and subsequent numbness meant. He didn’t think he would ever walk again.

“I just figured that was it,” he said.

That was before he met Jan Black. She put him through physical therapy at his home and eventually Hull became a walking quadriplegic.

Soon after, Black and Hull co-founded Neuroworx. In its 10 years, the nonprofit has helped people with spinal injuries gain skills and become more independent.

“Even if you give someone that much more independence,” Hull said, holding his thumb and forefinger close together, “it’s a quantum difference.”

Shillcox’s journey began at Neuroworx shortly after his accident. He participated in locomotor training — exercises designed to simulate the experience of walking in an attempt to retrain the brain and body — but did not see any measurable progress. However, he was able to exercise his body and be in a good position to be accepted to the epidural stimulator program, he said.

He saw a commercial featuring Rob Summers, the first person to receive the epidural stimulator implant, and signed up to be a participant in the Loiusville study.

Neuroworx and the University of Louisville’s Kentucky Spinal Cord Injury Research Center are associated with the Christopher and Dana Reeve Foundation that supports those working to find a cure for spinal cord injuries.

Shillcox went through another 80 sessions of locomotor training in Louisville but again did not see progress. At this point, researchers knew that any gains he made from that point would be a result of the epidural stimulator.

The lab in Louisville provided a safe environment where researchers could use more voltage and increase Shillcox’s movement as a result. Although he is limited in what he can say about the study, what he can do with reduced voltage and configurations outside of the lab are a small taste of what he was able to do in the lab, Shillcox said.

After spending about a year and a half in Louisville, he returned home to Green River, Wyo., in early April. Outside the lab, he is only able to use the stimulator for four hours a day. He still participates in exercises, such as standing, to increase his blood flow and improve bone density. He will return to the lab in Kentucky every six months to measure his progress.

An unintended side effect of the implant was the ability for the participants to regain control of their bladder, bowel and sexual functioning, Shillcox said. Even with the stimulator turned off, the secondary effects are continuing to improve, although not functioning at full capacity, he said.

Shillcox is eager to help others have the same opportunities he has. He is hopeful that if the implant proves succesful over time, this technology could be available to others with similar injuries.

He showed his new abilities while at Neuroworx Monday, working with physical therapists to strengthen his muscles. He sat on a stability ball across from Black. With the stimulator engaged on his core, he was able to sit up straight and reach across to touch Black’s hands. As Shillcox decreased the voltage, he began to slump, no longer able to hold himself up with the same muscles.

As technology improves and scientists learn more about spinal cords, Hull predicts there will be greater neurological recovery for those with spinal cord injuries, leading to improved health and quality of life.

“I hope in five years we look back and what Dustin is doing sort of looks like the Model T version versus the Ferrari version in the future,” Hull said.