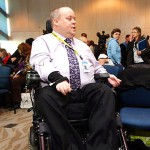 “I was told by the doctors, you broke your neck, you’ll never walk again,” Acting Detective Bryce Clarke said. “You’ll never work again; you won’t have much of a life.”

The Edmonton Police Service member described the news from doctors that spurred his determination to surpass the odds after a freak accident nearly ended his life.

Back in 2001, the then-29-year-old patrol officer had just finished a night shift on Whyte Avenue, and was relaxing with friends in his backyard.

“I remember walking up beside his house, first time I’d ever been there, and there’s Bryce on top of his deck diving into his pool,” Clarke’s friend Sgt. Pat McCormack said.

McCormack said another friend assured him Clarke did the stunt all the time – but the light-hearted gathering turned terrifying, after Clarke took another dive into the 4-foot, above-ground, pool.

“When I dove in, I heard a loud crack, and I was floating face down,” Clarke said. “I realized, I can’t move, I was still conscious.”

Moments later, McCormack realized what had happened, screamed for someone to call 911, and pulled Clarke from the water – initially, McCormack said it didn’t look good.

Clarke was airlifted by STARS Air Ambulance to hospital, and he didn’t wake up for about a week.

Faced with an initially dismal diagnosis, Clark’s horror turned to determination to prove his doctors wrong. 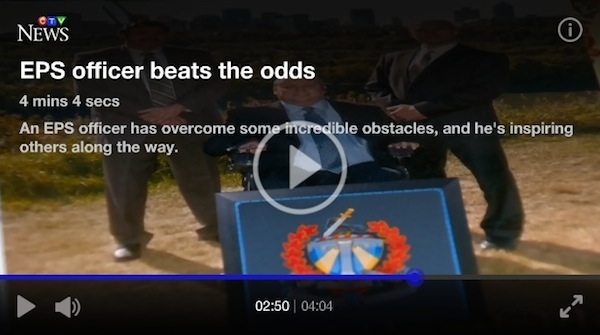 Since then, Clarke has regained partial use of his arms, and has come up with ways to complete day to day tasks independently – such as inventing a cup holder on a wrist cuff enabling him to hold his own drinks, and using a tent peg to change the channel, use his cell phone, and to type.

A few years after the accident, Clarke returned to work – eventually becoming one of two full-time quadriplegic police officers in Canada.

“It was really important as a police service to find a way, when Bryce was ready, for him to have a job,” Ed McFarlane, Superintendent of the Criminal Investigations Unit said.

At first, Clarke took on public speaking, and undercover work with the Gang Unit, finally joining the Historical Homicide Unit full time in 2010.

“That was a dream come true,” Clarke said. “Even before my accident, my dream was to eventually become a detective in homicide.”

Although he hasn’t quite yet become a detective – he’s currently working as an acting detective – he’s an active part of the unit, reviewing evidence in cold cases, and hoping to come up with new leads.

“It doesn’t matter that he sits in a chair, he is able to do very meaningful work as a police officer in that chair,” McFarlane said.

Outside of work, Clarke rarely slows down – going tubing, and climbing a mountain, he’s also met Rick Hansen, and recently won The Shining Star Award from the Canadian Paraplegic Association.

“I can truly attest to how inspirational he is, not only as a person with a spinal cord injury, but what he does in the community,” Zachary Weeks with the Canadian Paraplegic Association said.

According to those who know him, Clarke’s attitude leaves a lasting impression.

“Of all the people I know, I have never met a fellow with the sense of optimism and the positive attitude that Bryce brings to life,” McFarlane said. “Nevermind the job of policing.”

For Clarke, it’s about challenging the odds, and working to achieve his goals in life.

“If you have a dream, it doesn’t matter your situation, you can achieve it, you can get there.”