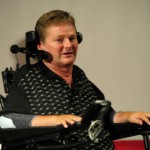 But he has soldiered on as both a winning INDYCAR team owner and as a champion for paralysis research and treatment through the Sam Schmidt Paralysis Foundation.

By his count, the foundation has raised somewhere between $12-13 million since its inception.

However, Schmidt grew, in his words, “impatient” over the long-term timeline for a cure for paralysis, and he and his foundation – which has changed its name to Conquer Paralysis Now – searched for a way to generate faster progress.

The result is a project known as the SCI Challenge, which is set for a full introduction later this year. The Challenge will provide incentive for research scientists and the business community to team up by providing major cash awards for meeting specific milestones toward the final goal of a cure.

“I’m involved in my everyday life with running races and trying to compete for a prize and trying to be the first one to cross the finish line,” Schmidt told MotorSportsTalk in his motorhome at Indianapolis Motor Speedway.

“And I think that’s the way we should go forward with challenging people on a global basis to find solutions in a quicker fashion.

“I think it will encourage collaboration between private industry and public entities and research facilities. The feedback we’ve gotten is very positive and I think that it’s the way to go.”

CPN medical advisor Dr. John McDonald, a neurologist, research scientist and director of the International Center for Spinal Cord Injury, said in a statement that the Challenge was “a tremendous step forward and will change the course of paralysis.”

As for the idea of using prizes to fuel potential breakthroughs, CPN president Ida Cahill was charged with investigating that in the early stages of the project. She noted today that such prizes have been used at many points in history.

“Great Britain offered a prize in the 1700s because they lost an entire naval fleet because they couldn’t measure longitude,” she said. “So they decided to offer a prize and thought Sir Issac Newton would win it. But it turned out [the winner was] a clock maker [John Harrison]…

Cahill said the Challenge will involve three stages, with each of them building upon the success of the previous one. The first stage centers on higher-level research – “audacious, novel ideas” as she put it – while the second stage involves animal and human research models getting to clinical trials.

The final stage is what she calls “functional recovery,” which can mean different things for paraplegics and quadriplegics.

“If you asked people who are paraplegics, they will say ‘I’m OK being in a wheelchair – I don’t like it – but I’ve gotten used it, I can get around, and I can live like this. But what I want back to me that is most important is my privacy.’ So they’re looking for bowel, bladder, sexual function,” she explained.

“When you get to somebody who is a quadriplegic, they will say, ‘It’s awful being in a wheelchair, but the one thing I really want is that I want to move my arms. I would love to move my fingers. I would love to be able to hug my children or my loved one, brush my teeth, comb my own hair.’

“They have different wants and needs than the paraplegics. But this Challenge we’ve put together addresses both of those issues.”

Another key element of the Challenge will be a website that shall serve as a platform for scientists around the world to share both their successes and, just as important, their failures.

By putting the failures out in the open, other researchers will know which paths not to take and that in turn will hopefully lead to the faster progress that Schmidt and CPN want.

He believes that some in the medical community may be a bit reluctant to share their failures, but feels that it’s essential to the project.

“That’s never been done before and I think it’ll take a while for some people to get used to,” Schmidt said. “But I think it’s absolutely critical in making something happen quickly, that we encourage, and/or finance, and/or force people to publish their failures so others can learn from that and not do the same thing.”

Schmidt is also hopeful that a new sense of collaboration on the researchers’ side of the fence will take hold as the Challenge commences.

“Everybody just wants to write a paper, everybody wants to get funded through applications, and all of this very secretive, so why would you ask for help?,” he explained.

“With the prize format, I think it opens up an opportunity for researchers to go to companies and say, ‘Hey, I’ve done all this basic science, I’ve got all this information, this particular prize in front of me is absolutely suited for what I’ve been doing the last 10 years – help me win this prize and we’ll both share in the results.’”

That collaborative spirit was certainly on display in Schmidt’s recent drive around IMS in a Chevrolet Corvette that featured special electronics, an interface that helped him brake with a bite sensor, and also steer and accelerate in intervals by tilting his head.

CPN was not directly involved with that initiative, but Schmidt believes that it was still a “proof of concept” for what the foundation hopes to do with the Challenge.

“It would’ve taken somebody at a university with a group of students five years to build that car,” he said. “It was done in nine months because we decided to do it and we had a deadline of last weekend. And it got done.

The official unveiling of CPN and the SCI Challenge will take place Saturday during the foundation’s Racing To Recovery Gala in Carmel, Indiana – one day before Schmidt and his drivers, Simon Pagenaud, Mikhail Aleshin, and Jacques Villeneuve, set out to win the 98th Running of the Indianapolis 500.

Facebook
Twitter
Email
Mix
Digg
Previous articleRick Hansen: We can all be difference-makers in the world
Next articleHEALTH LINE: No Diving Into Lakes, Rivers and Oceans

Warrick Holdman out for 3 months with spinal cord injury