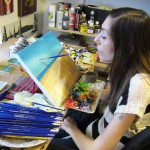 It has been 18 years since Mariam Pare flew from San Francisco to Richmond, Va. for a weekend getaway.

Pare has not returned to her apartment on the West Coast since that flight, but she still paints — just without the use of her arms or legs.

The 20-year-old art student who left San Francisco is now a 38-year-old professional — and one of the featured exhibitors at the upcoming Buffalo Grove Invitational Fine Art Festival.

After her trip to see East Coast friends left her a near quadriplegic, it took Pare seven years to learn how to manipulate her brush again with an entirely different, much shorter stroke.

Every single detail of Pare’s life, including the way she expresses herself to the rest of the world, changed when a friend told her to exit the freeway on what, for Pare, turned out to be the wrong off-ramp.

“For years, I would lie about it and say I was in a car accident,” she said. “It took me a long time to accept what happened to me.”

But what happened to her is part of what is bringing her to Buffalo Grove.

Pare grew up in Naperville, an artistic child in an artistic family. Aunts and uncles drew, and she planned on attending a Chicago-area college as a design student.

Influenced by Dali and Picasso, Pare used the full range of her hands and arms and plenty of color to explore cubism, semi-abstract styles and expressionistic portraits.

She moved to San Francisco, made new friends, and some of them moved to Richmond. In 1996, they invited Pare to visit their part of the world, and she bought a round-trip ticket.

Her friend John had a car, but because of speeding tickets, Pare was driving. They did some mountain biking and hung out, and decided to visit the West End neighborhoods.

“I didn’t know where I was going; I was just following his directions,” she said.

They exited the highway on what Pare said may or may not have been the correct off-ramp; either way, they went through a neighborhood she was suddenly not excited to visit.

“There were a lot of people on the corners,” she said. “It felt like a rough part of town.”

A four-way stop sign brought them to a halt.

“A bunch of noise erupted,” she recalled. “I didn’t know they were guns.”

Pare suddenly felt a searing pain in her back.

“I thought something had happened to the car and I’d been electrocuted,” she said.

In a Richmond hospital, Pare learned that her fifth cervical vertebra had been struck by a bullet.

“They told me I’d been shot,” she recalled. “And that I was a quadriplegic.”

The police said they happened to be driving by when a gunfight broke out, Pare said. None of the witnesses would speak with officers, she said. Pare will likely never know who shot her.

The bullet lodged itself high in her spinal column, where it remains to this day; removing it, doctors said, would surely kill her, according to Pare.

The swelling caused by the bullet cuts off her spinal cord, nearly paralyzing her from the waist down, she said. Pare still has enough strength to push her own wheelchair, if necessary, but prefers piloting a motorized chair.

It saves her strength for painting, which she does by holding her brush in her mouth. This is the skill that brings her to the Invitational Fine Art Festival June 12-13.

Pare hopes to provide a mouth-painting demonstration for Unique Expressions, the collection of disabled artists assembled by Village Hall’s Commission for Residents with Disabilities.

“A lot of people are interested in the way I create my art, because … it’s kind of different,” she said.

Painting was something that she returned to as part of her rehabilitation, though her new physical limitations changed everything about her creative process. Taking the brush out of her fingertips, putting it into her lips and learning how to paint all over again were a microcosm of her journey through grief.

“I used to cry a lot,” Pare said. “I used to think that I was a good artist, before my injury. I was at the point where I was getting a lot of praise for it.”

Her mind remained sharp and her hunger to paint unquenched. But the aspiring student had to learn how to draw stick figures.

Day by day, they got better — but Pare was almost embarrassed of what she had been reduced to.

“I almost gave up, it was such a blow to the ego,” she said.

After seven years of diligence, Pare felt her mouth-painting skills had grown to the level of her arm-painting ability, she said. That is, of course, except for the obvious limitation: Without the range of a full arm span, Pare now paints with a stroke of 10 inches at most.

Which changes everything. Most of her canvases are small now and to create something large, she must paint its bottom,then flip it 180 degrees and paint its top — upside down.

Pare said she is grateful to still have the ability to bring to life what her mind envisions, and she is exploring styles beyond Picasso and Dali. But the simple fact that her brush stroke is so different limits even what she brings forth from her mind, Pare said.

Although she writes her signature with her mouth, it is identical to what she did with her hand. But art is much more detailed than that.

“Your mannerisms are a mental thing, and no so much a physical thing,” she said. “I can mock my signature, but I can’t do it so well with my brush strokes.”

Pare now makes a living from her art and lives mostly independently in Naperville. A caregiver drops by in the mornings and evenings.

The cause of the injury changed her life almost as much as the paralysis itself.

“I felt like I was a good person … and, I was a gunshot victim,” she said. “There’s a stigma that comes with that.”

During her rehab, Pare moved back in with her parents; some of her old friends and new acquaintances were wary of her, though, she said.

What was she doing in a neighborhood like that? What had prompted someone to shoot at her?

Pare went through a phase of claiming she was in an accident. Now, she no longer cares about stigmas — and tells the whole story.

Learning to live with the injury, Pare said, has been like learning to paint with it.

A network of support