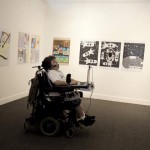 Accident paralyzed University of Iowa student when he was 7

The details matter to Tony Ramos. As an artist, the details are what make his work come to life for the viewer.

“Any person who likes their work this much, they want to get down to the last detail,” Ramos said as he sat in the middle of a small room in the University of Iowa’s Studio Arts Building. Punctuating the white walls were 20 poster-sized pieces of art, some depicting well-known superheroes and others showing moments significant to Ramos’ life.

The many details that matter so much to Ramos are not created with a pencil or paintbrush, but with a sensor, his chin and a laptop. Ramos is a quadriplegic. He graduated this year from the University of Iowa with a Bachelor of Fine Arts in graphic design.

“It’s only difficult if you make it difficult,” said Ramos as he showed how a sensor on the top of his laptop and a sensor taped to his chin allow him to draw in his computer programs. “I’m up for any challenge that comes my way.”

Two posters that are part of Ramos’ exhibit, titled “ComicTon,” depict the accident that left Ramos paralyzed from the neck down. When he was 7 years old and riding his bike with friends, an SUV pulling a boat trailer swerved to miss but the boat trailer swung and hit Ramos.

Ramos is considering expanding on these two pieces and creating a children’s book that shares more of his story.

“Every student is really unique, but he is special,” said Lynne Lanning, Ramos’ undergraduate adviser at the UI. Lanning described Ramos as a constantly positive individual who hasn’t focused on things that might be holding him back, instead looking for a way to overcome barriers.

“It was something I was feeling at the time,” said Ramos as he looked at a five-paneled piece focusing on a soldier and meeting a loved one in heaven. Though Ramos said much of his inspiration comes from music, there also are pieces, such as the one with the soldier, that he said express how he’s handling life. In the case of the piece with the soldier, he described the idea of “constantly being at war with my own body.”

Ramos did not originally set out with the goal of pursuing art, first studying biomedical engineering, but decided to become a major in graphic design when he remembered how much he enjoyed an art class he took in high school.

“It took practice,” Ramos said about using the sensor on his chin to create lines and, after many hours of work, full images. “You have to get used to what you can do.”

By Katelynn McCollough, The Gazette