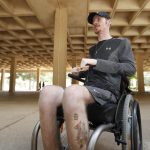 If it were possible to travel back in time, many people might choose to edit their past decisions or actions.

Austin Reynolds is often asked if he would go back three years and do things differently if he could. A serious spinal cord injury drastically changed his world, but Reynolds said it is not something he would want to change about his life because of how the experience has shaped him into a better person.

Reynolds was about eight months into his job with Lockheed Martin when his injury happened on the Trinity River in July 2016. The former Permian High School graduate had earned a bachelor’s degree in environmental management from Texas State University and moved to Fort Worth soon after graduation.

He had gone to the river one summer afternoon with his older brother and his sister-in-law and decided to jump in, which he had done before, but this time he became unconscious after diving in headfirst. He had hit something in the water.

“It was just a quick one second thing,” he said. “I came to maybe like a minute or two later, facedown, and I realized I couldn’t flip back over off of my stomach. I was just lying there hoping my brother saw me.”

Reynolds said he immediately lost function in his triceps and from his abdominal muscles down.

He was able to move just his shoulders while in the water.

His brother noticed something was wrong, jumped in after him and quickly called an ambulance.

Paramedics came about 20 minutes later and wheeled Reynolds on a gurney for almost a mile down an unevenly paved walkway. Reynolds had fractured his C6 vertebrae and displaced his C5 but showed no signs of brain damage.

“It’s been a journey,” Reynolds said. “Everyone likes to think the best when they first get hurt. I thought I’ll be here two weeks and be back on my feet again. That’s your mindset.”

He said his view shifted while at Baylor Scott & White Institute for Rehabilitation after he learned the difference between a complete and incomplete injury. A complete injury eliminates the brain’s ability to send signals below the point of injury.

He soon understood that walking would not be in the cards.

“Once I learned what this was going to be, it was like OK how can I get as independent as possible and how can I keep my brain sharp,” Reynolds said. “Everyone handles it differently, some people get really angry and some people get really sad and depressed. My personality sees a glass half full and what can I do to take this situation and make the best out of it because it’s not going to change.”

“You’re just remapping and relearning how to maneuver in the world and what you want to do,” Reynolds added. “What’s really important starts sticking out.”

Reynolds is now 27 years old and is a current student at the University of Texas Permian Basin. He is pursuing a master’s degree in history.

He said his experience has given him immense insight in such a short time frame that he wants to continue learning from the experiences of others throughout history.

“I would love to teach at the college level or even high school,” he said.

Reynolds has also been working toward achieving more independence by completing driving evaluations using a converted car with various modifications. Although he completed his requirements and passed his driving test, he does not have a vehicle at this time due to costs and limited availability of vehicles adapted for disabilities in West Texas.

Barriers to access have been reoccurring for Reynolds who has had to adjust his lifestyle to live in a world mostly designed to accommodate able-bodied people.

He willingly plays the role of educator in public spaces for those who may have questions about his disability.

“I think there are a lot of misconceptions about people in wheelchairs,” he said. “I’d rather you ask and me be able to teach you something than you make assumptions and make things uncomfortable for everyone.”

He highlighted that September is spinal cord injury awareness month and said helping others understand disabilities and the needs of the quadriplegic community is important to him.

“Something about spinal cord injuries that I think is very unrecognized is how expensive it is when you start putting together medical supplies, shower chairs, rehab and all of this stuff you need,” he said. “You’re dealing with these emotions of what has happened and you’re also dealing with the consequences in the real world from an economic standpoint.”

Reynolds said some patients in the rehabilitation center he was in could not afford to fully modify their homes, which impacts a person’s degree of independence.

“We have a family friend who is a contractor,” Reynolds said. “He redid our house to make it all accessible but that’s not the case for a lot of people. I think this injury teaches you a lot and humbles you.”

The National Spinal Cord Injury Statistical Center website states that health care costs and living expenses for people with tetraplegia alone can total up to $1 million after the first year, according to 2015 estimates.

Reynolds said making it through his first year after the injury was an achievement he celebrated with his brother in a tattoo parlor in Fort Worth.

A red cardinal is inked on his left leg.

“I’ve always loved cardinals,” Reynolds said. “I had a nest outside of my room when I was younger and was drawn to them. I have red hair too, it’s my bird. When I’m getting dressed or having a bad day, it’s like look at where you’re at, it reminds me.”

Daughter is inspired by mom’s injury